The project office of the Réseau express métropolitain (REM) wishes to inform drivers of major work to be done on Highway 40 (A40), which will require the complete closure of a portion of the highway between the A13 (exit 60) and Saint-Jean Boulevard (exit 52) in both directions, including the service roads, from 6 p.m. on Saturday, November 3 to 5 a.m. on Monday, November 5 (closures of the service lane as of 3 p.m. Saturday). Local traffic for stores and businesses in the area around the highway will be allowed.

The exit ramps from the A13 North and South to the A40 West will also be closed during this period. Given the circumstances, traffic may be particularly difficult along this major thoroughfare, so drivers are strongly advised to use the A20 for east-west travel. It is also strongly encouraged to concentrate its car travel during the day of Saturday before 6 p.m.

During this major weekend closure, every effort will be made to complete the work as soon as possible so that lanes may gradually be reopened. Up-to-date information on the progress of this major operation will be available via the REM Twitter account @REMgrandmtl. 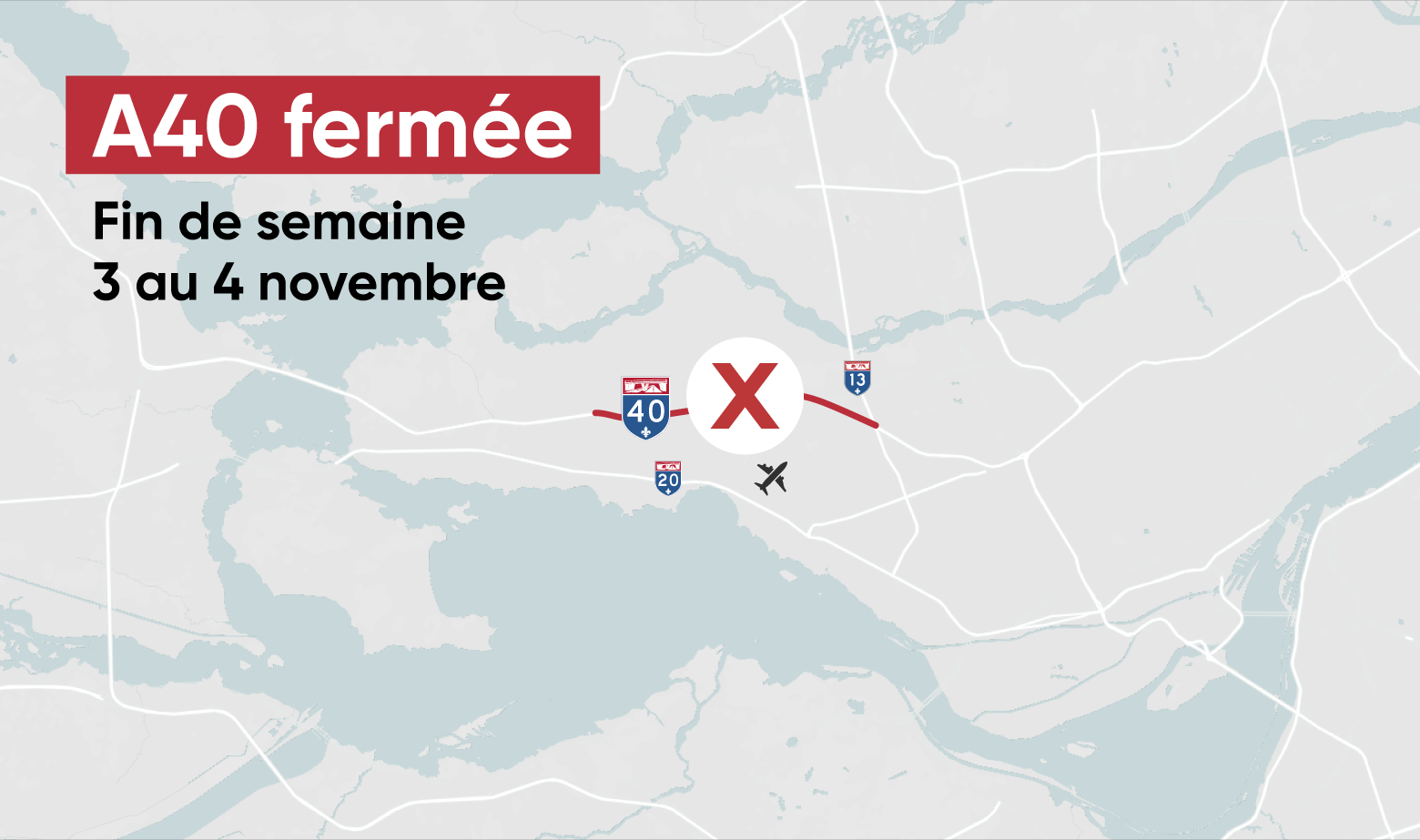 This major closure will enable the NouvLR consortium to proceed with the complete demolition of the railway bridge over the A40 near Henri-Bourassa Boulevard West. The blitz will be carried out during the day and night and will mobilize many pieces of heavy equipment. Nearly 2,000 m3 of reinforced concrete will be demolished.

This bridge is a section of the Downey railway spur, which belonged to Canadian National (CN). Acquired as part of the REM project, this rail corridor will be used for the REM’s future tracks, thus minimizing expropriations and the impacts on the built heritage.

Once the bridge is demolished, construction work for the REM can begin in this area, which will eventually be the meeting point for the REM's two branches, one of which will lead to the West Island and the other to the Montréal airport. The construction of the elevated portions of these branches above the A40 will require occasional work on the A40 in the coming months.

Detours and notices to drivers

Although the REM recommends completely avoiding the A40 during this period, drivers will have the option of taking two detours:

Detours via the highway system are therefore recommended to facilitate traffic flow. The proposed eastbound detour entails two options: via Saint-Jean Boulevard or Des Sources Boulevard. Police units will be positioned at various intersections during this period to facilitate traffic and to be able to respond quickly should any problems occur.

Numerous signs will also be installed in advance to warn drivers:

Access to downtown Montréal will also be much easier via public transit. For example, exo line 1 (Vaudreuil-Hudson) will be recommended (see the weekend schedule), as well as buses 202, 204 and 211, which will run on the A20, and bus 968 in the Roxboro-Pierrefonds area.

Lastly, for drivers wishing to cross the island eastbound, it will be recommended to take the A30 to avoid work zones. Drivers can also take highways 640 and 440 from Repentigny, Terrebonne or Laval for east-west travel.

There are a number of information tools in place to monitor work progress, including a website that is updated daily, work notices, a telephone line, a newsletter and SMS alerts. For more information, visit REM.info/en, follow us on Twitter @REMgrandmtl or consult our Facebook page.