An innovative agreement between CDPQ Infra, the UPA and the CMM to promote the use of agricultural land 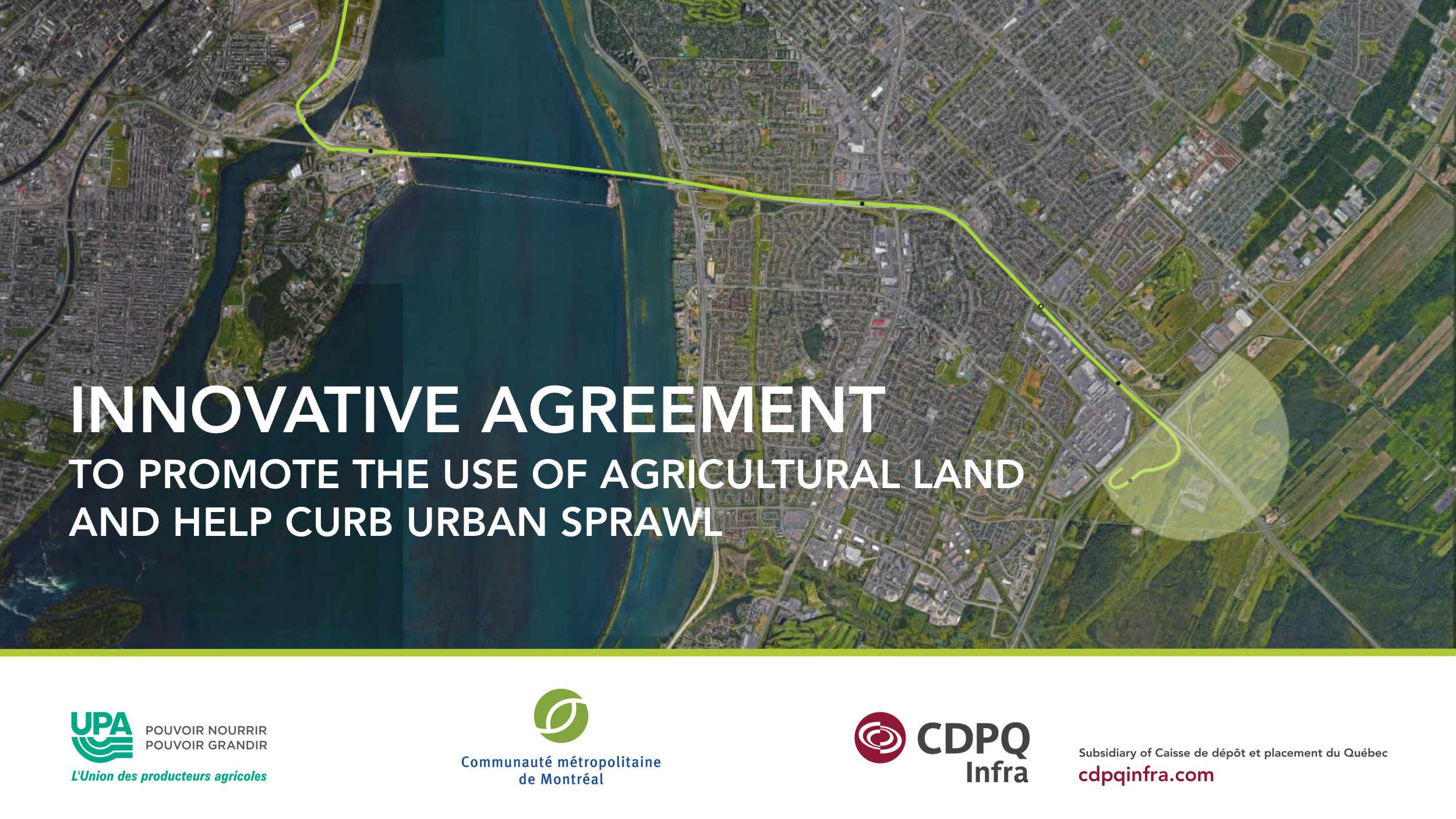 CDPQ Infra, a subsidiary of Caisse de dépôt et placement du Québec, announced today a partnership with the Union des producteurs agricoles du Québec (UPA) and the Communauté métropolitaine de Montréal (CMM). This partnership will enable the creation of an agricultural land trust and, eventually, a metropolitan agricultural park, to promote the use of agricultural land and its activities, thereby helping to limit urban sprawl around the Réseau électrique métropolitain’s (REM) future South Shore terminal station.

This initiative is a first between a project promoter, the UPA and the CMM. It demonstrates CDPQ Infra's commitment to finding innovative solutions that meet the needs expressed during project consultations and continue to improve the REM project.

"Through this agreement, we are laying the groundwork for a unique initiative to promote the use of agricultural land located around the South Shore terminal station. This initiative aims not only to protect this land but also to help curb urban sprawl by boosting agricultural activity in this sector. The agreement demonstrates that by teaming with quality partners, the REM advances ideas and initiatives that benefit Greater Montréal. We will continue to improve the project right up until the first trains are in operation," said Macky Tall, President and Chief Executive Officer of CDPQ Infra.

“The creation of an agricultural land trust, in connection with the potential implementation of a metropolitan agricultural park, is a remarkable way to address this important question in a project of great public interest. Last year, we expressed our concerns regarding urbanization and urban sprawl, but today’s announcement substantially limits this possibility, which is good news,” added Marcel Groleau, President of UPA.

“Today’s agreement is a first for Greater Montréal, agricultural producers in the region, and Caisse de dépôt et placement du Québec. The purpose of this agreement is to promote the cultivation of agricultural land located around the future South Shore terminal station of the Réseau électrique métropolitain. The creation of a trust and a potential metropolitan agricultural park confirms the long-term agricultural mission of this land. Initiatives like these enable us to achieve the metropolitan objective of increasing the area of cultivated land by 6% in the region," said Denis Coderre, President of the CMM and Mayor of Montréal.

Principles of the agricultural land trust

During the REM project consultation process, CDPQ Infra and the UPA discussed ways to limit the potential impact of the South Shore terminal station on urban sprawl. This concern was expressed particularly by the City of Brossard and the agglomeration of Longueuil. Furthermore, an agricultural trust concept was advanced by Équiterre, Vivre en ville, the Regroupement national des conseils régionaux de l’environnement du Québec and the David Suzuki Foundation. Based on this idea, CDPQ Infra and UPA management worked together towards the agreement announced today.

The land trust could also encourage the use of metropolitan woodlands around the terminal, by becoming a recreational-tourism destination (pedestrian links, walking trails) easily accessible through the REM.

The CMM will work with CDPQ Infra and the UPA to agree on a plan to implement a metropolitan agricultural park, in accordance with the Plan métropolitain d’aménagement et de développement, whose objective is to increase the area of cultivated land by 6%.

Numerous concrete improvements have been made to the REM project, in addition to the creation of a land trust announced today. Improvements include the addition of three new stations and two connections to the Montréal metro, the acquisition of an aerial structure at CN to bypass two heritage buildings and the closure of three streets, extension of an existing tunnel so as not to affect the Des Sources nature park and the planting of 250,000 trees to offset GHG emissions during the construction phase. These improvements demonstrate the benefits of the continuous engineering approach for this project, which facilitates ongoing improvements to the project throughout all development stages, ensuring that the population’s needs are heard and considered.

As part of this approach, meetings with municipalities and transit authorities continued to be held regularly over recent months. Through these workshops, several needs have been identified. New concrete improvements to the project have been proposed to address these demands.

The addition of 40 cars to the initial REM fleet brings the total to 240 cars, a significant improvement. This addition will increase service frequency by 20% during peak times throughout the network. Furthermore, it is estimated that approximately 10% of REM users will favour this new line, therefore reducing pressure on the Orange line at peak times. For example, frequency on the main section of the REM, which serves 14 stations, going from the South Shore terminal to the Bois-Franc station, will increase during peak times from one departure every 3 minutes, to one every 2.5 minutes. The 12 additional departures will make it possible to carry an additional 7,200 users.

To ensure better integration of the REM and traffic fluidity around the stations, the project will also include the construction of new railway bridges, pedestrian walkways and access roads, in addition to the relocation of some stations, overpasses and parking facilities.

All these improvements to the original project bring the cost estimate to approximately $6 billion, compared to the previously estimated $5.9 billion. These additions, which are estimated at $140 million, will better meet the needs expressed in the consultations conducted by CDPQ Infra.

The improvements will provide concrete benefits to users and communities in three priority areas:

They illustrate CDPQ Infra's commitment and its innovative approach to addressing local community needs and facilitating integration of the project into metropolitan area planning.

The Réseau express métropolitain (REM) is a new, integrated 67-km public transit network intended to link downtown Montréal, the South Shore, the West Island (Sainte-Anne-de-Bellevue), the North Shore (Laval and Deux-Montagnes) and the airport through the operation of an entirely automated and electric light rail transit system.

The Union des producteurs agricoles (UPA) is a professional union with a foothold in every region in Québec. Its main mission is to promote, defend, and further the interests of Québec’s 41,000 farmers and 134,000 forestry producers. The Union is composed of 12 regional federations and 27 specialized groups.

About the Communauté métropolitaine de Montréal

Established on January 1, 2001, the Communauté métropolitaine de Montréal is a planning, coordination and financing organization that brings together 82 municipalities, close to 4 million people across over 4,360 km2. The Communauté exercises responsibility in land use planning, economic development, public housing, public transit and the environment.