What will the REM’s elevated stations look like? Find out through a 3D video of the future Fairview–Pointe-Claire station

This 3D video was produced by Lemay, one of the three firms in the consortium that was given the architectural mandate for 25 of the REM stations, along with Perkins+Will and Bisson Fortin. Using a technology similar to that of video games, this video immerses visitors into the environment of the future Fairview–Pointe-Claire station.

1 – Stations integrated into an elevated structure

As you cross Highway 40, you can see the REM’s elevated structure increasingly taking shape. In the West Island, this structure will feature four new elevated light rail stations serving three municipalities in a matter of minutes.

This structure allows these future REM stations to serve thousands of people without breaking up the territory by keeping the vast majority of pedestrian, cyclist and road accesses open. It also limits the footprint and minimizes the impact on roads by spanning the A40’s on- and off-ramps. The structure also guarantees increased frequency and fast travel times for direct access to downtown in less than 30 minutes, travelling over the traffic.

REM stations all observe the same main architectural principles and include the concepts of transparency, movement and wood. However, each station is adapted to its surroundings and has its own typology (underground, trench, level, on a slope or elevated).

Fairview–Pointe-Claire is one of the six so-called elevated REM stations, along with Des Sources, Kirkland, Roxboro-Pierrefonds, Sunnybrooke and Deux-Montagnes. Elevated stations are differentiated by their vertical volumes. They have separate platforms, one for each direction, located on each side of the elevated platform. 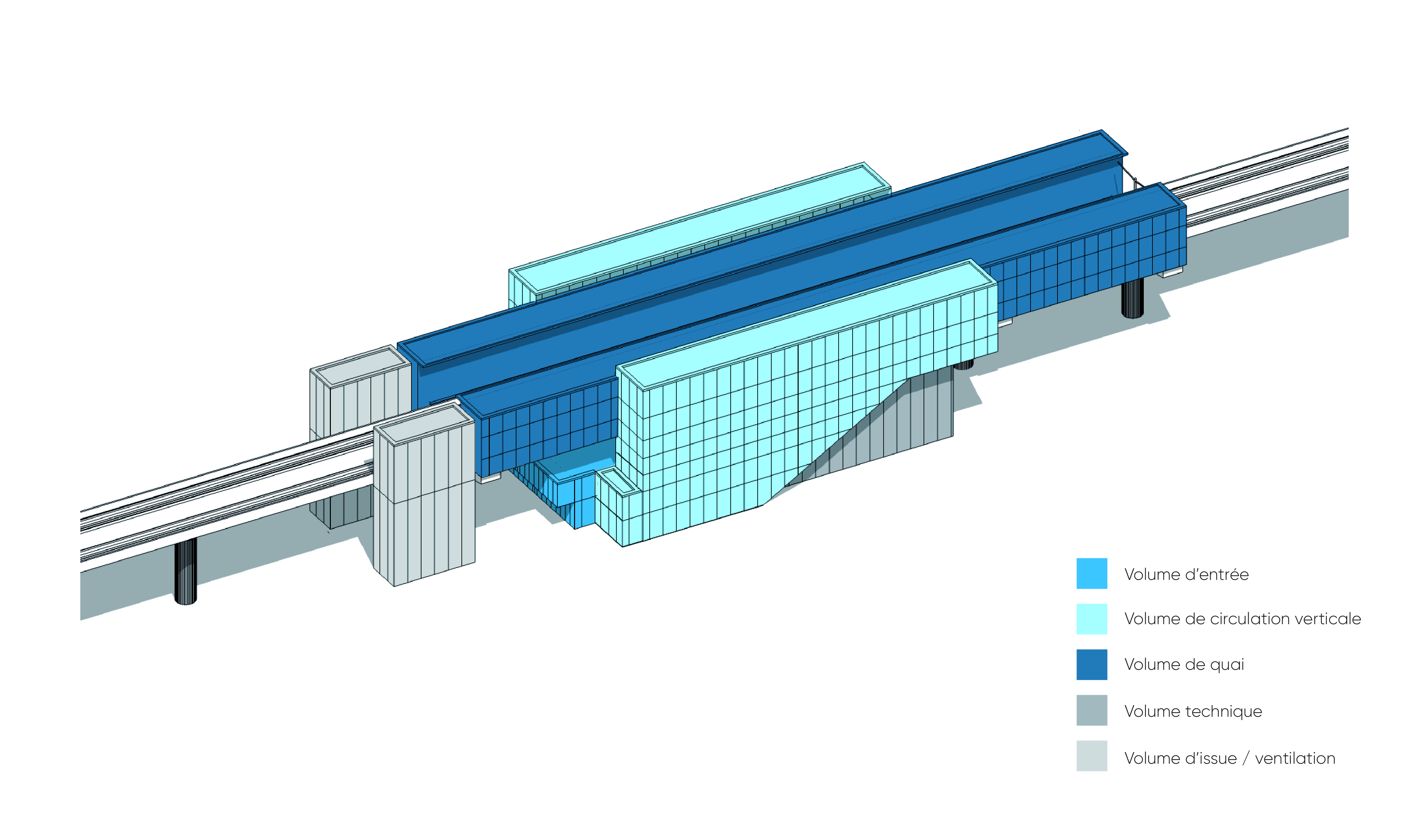 As soon as users enter a REM station site and approach the entrance, they will be guided by lines creating a pattern in the pavement. The entrance to the building is clearly visible thanks to its prominent canopy, which is used in all REM stations. 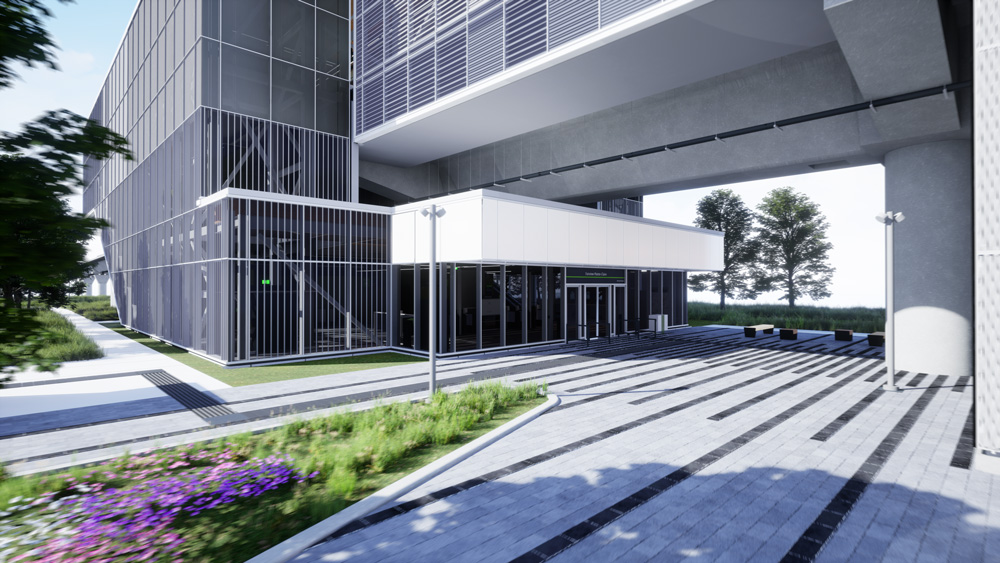 3 - The interior: From the entrance to the platform

As soon as you enter the station, you’ll see lines on the ground that continue those on the outside pavement. The ticket validation gates are also located at the entrance; tickets will be provided by the Autorité régionale de transport métropolitain (ARTM). 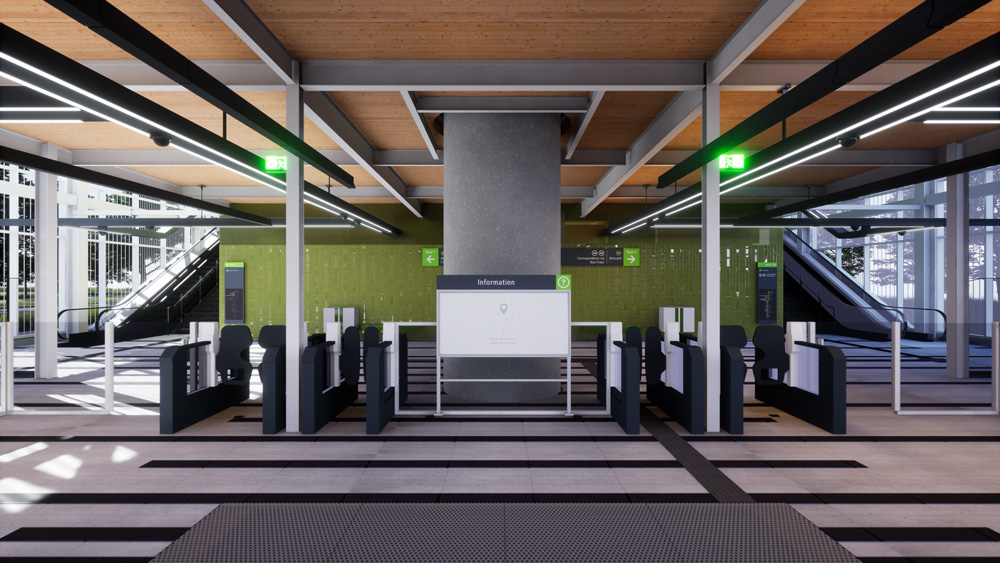 The validation terminals seen in the video are for information purposes only and not representative of reality at this time.

All REM stations will have elevators to ensure greater accessibility for people with reduced mobility. A guidance path, i.e. a path where the pavers are raised, is embedded in the ground to allow people with a white cane to orient themselves in the station and head for the platforms.

Taking the stairs toward the platforms, you can see the curtain wall pattern through the partition glass, which creates an effect of verticality. This pattern then changes and becomes horizontal along the platforms, following the users’ movement. 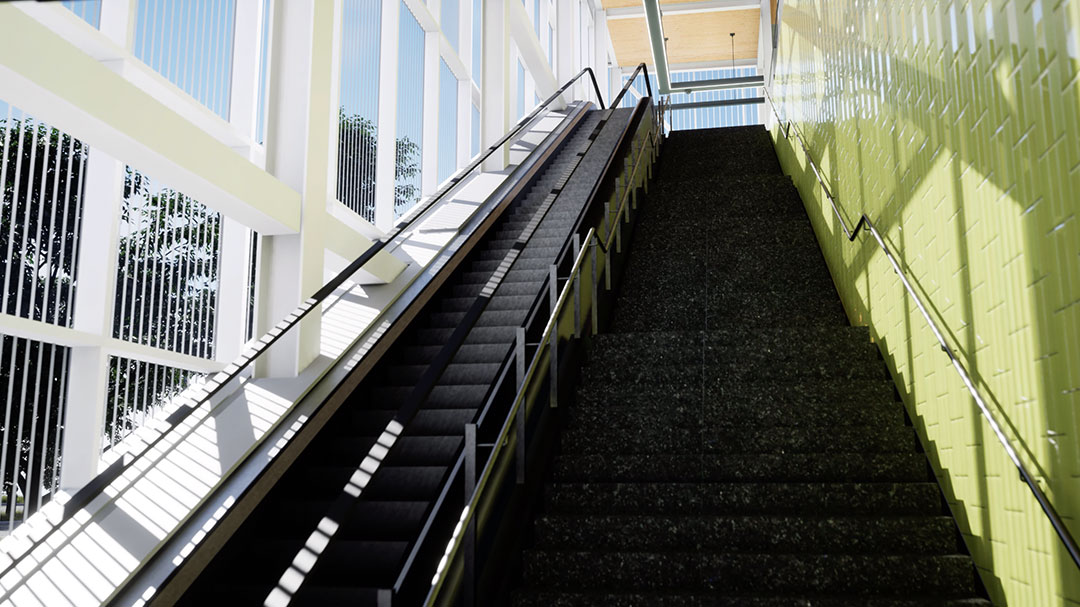 Movement—one of the three pillars of the REM’s architecture—can be observed through the pattern of the curtain walls, visible both outside and inside the stations.

Service ducts are located in the ceiling, concealing several functional components, including cables, surveillance cameras, lighting, speakers, etc. These ducts are both functional and aesthetically pleasing by fitting discreetly into the station’s architecture.

The architects have developed a colour strategy that will be incorporated into the REM network. The REM is divided into six sections, each of which has a distinct colour theme:

The colour themes are inspired by the places crossed along the REM’s route. For example, the blue "waterfront" is derived from the Rivière des Prairies, the forest green is reminiscent of the parks on the West Island and the red of the mixed urban sector refers to the brick found in the industrial and residential sectors of the borough of Saint-Laurent and the Town of Mount Royal.

The colour themes apply to:

Ceramic tiles will be used on accent walls in all REM stations, with a combination of matte and glossy tile finishes to create more texture. The colour is intimately linked to the theme of the colour strategy, as is the pattern. There will be subtle variations in the pattern from one station to another, i.e. each station will have its own ceramic pattern. 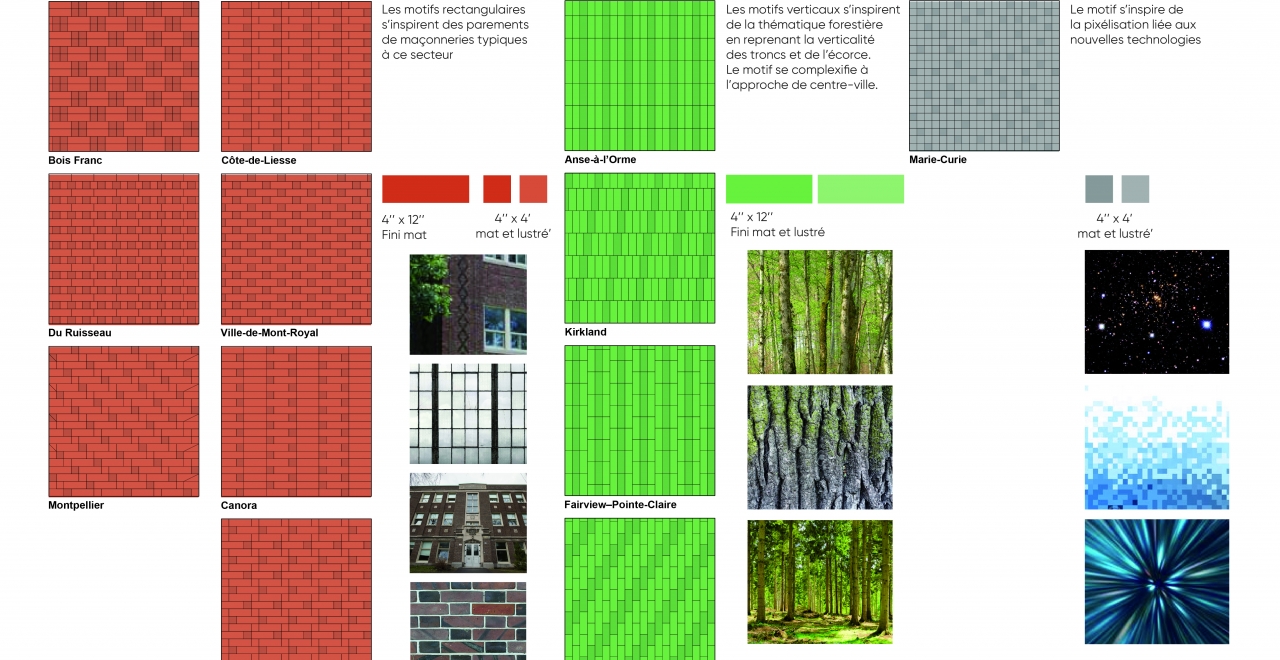 For example, the rectangular motifs in the "mixed urban" section build on the masonry facings typical of the area. 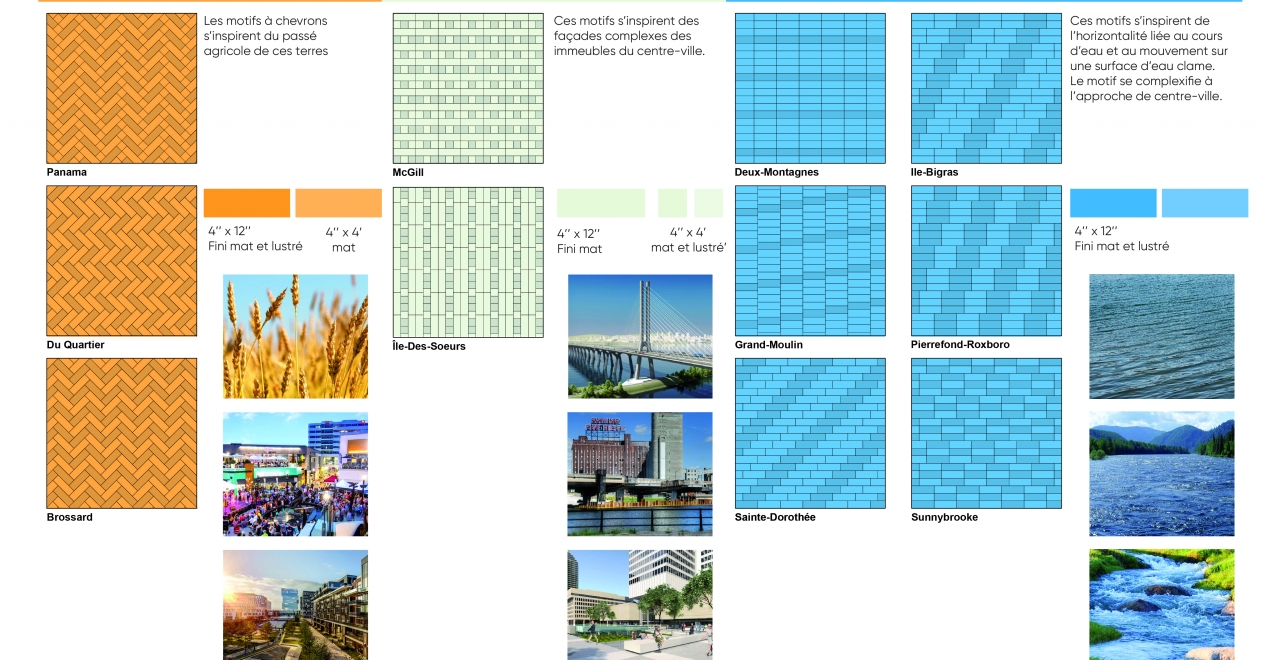 The herringbone patterns associated with the "urbanized rural" theme draw on the South Shore’s agricultural past. 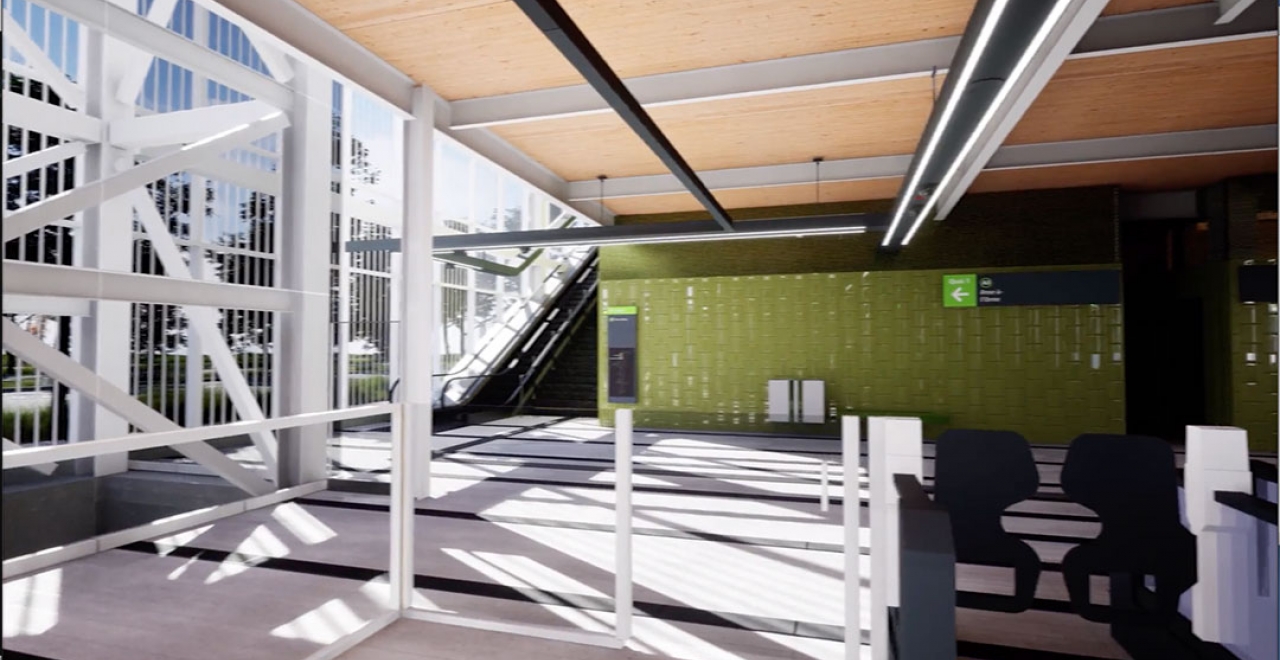 On the West Island, the stations’ accent walls will be clad in green ceramic. The vertical motifs are based on the forest theme, repeating the verticality of the trunks and bark. This colour on the accent walls and platform floors will create visual continuity that will naturally lead passengers from the entrance to the vertical traffic areas.
1 / 3

The furniture in REM stations will also be aligned with the colour strategy. There are various types of benches inside and outside the stations. 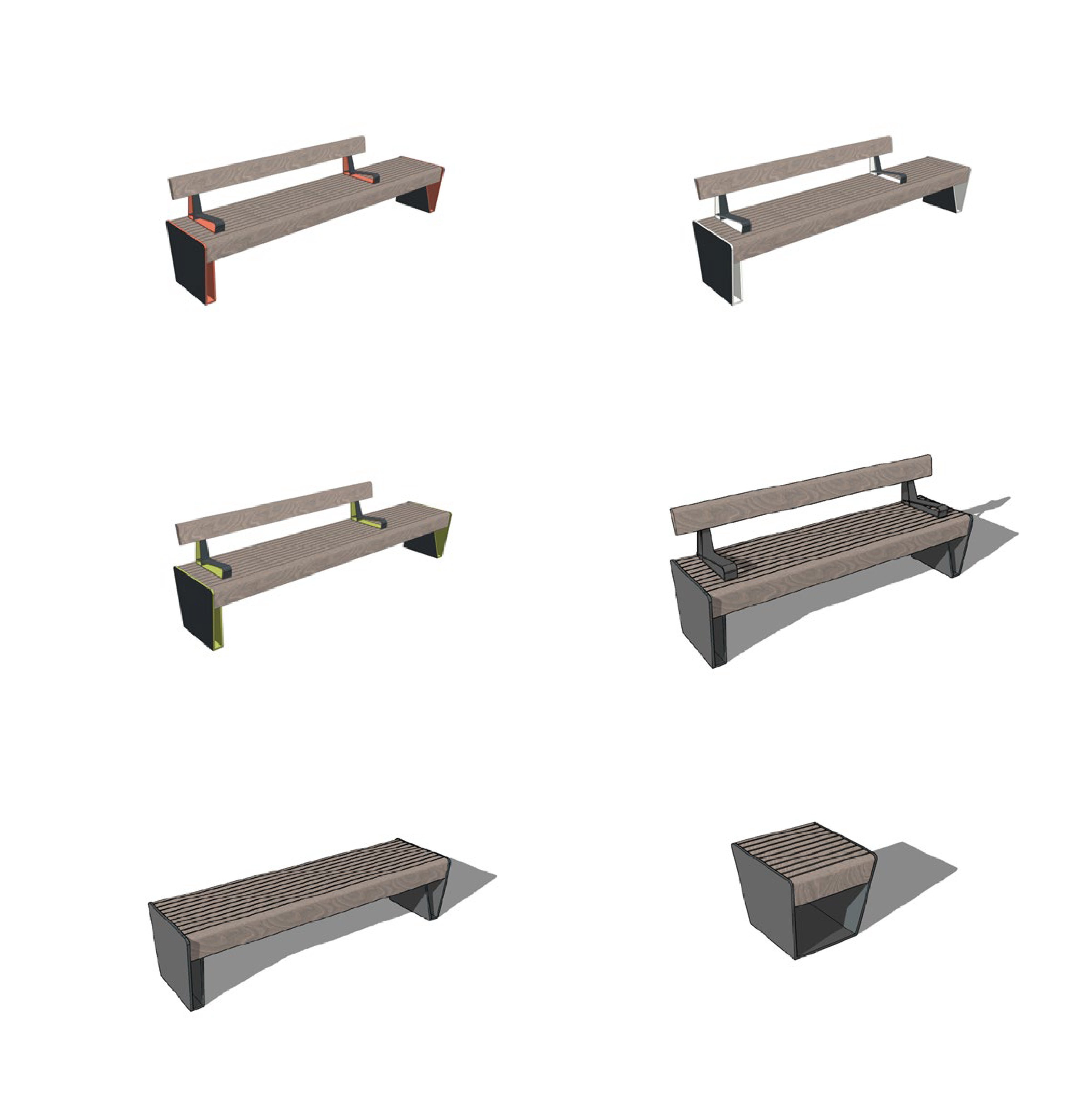 The types of benches vary based on their location and function on the site (individual bench, long bench, bench with or without backrest).

The furniture is contemporary in style, combining wood and steel.

A plant palette was created for each sector, based on the colour strategy, with plant selection drawing on the associated theme. Plant species were carefully selected by colour, but also based on the type of environment and surroundings.

Plantings will dot the sites as islands in the parking lots, entrances and other locations marking the route to the station. 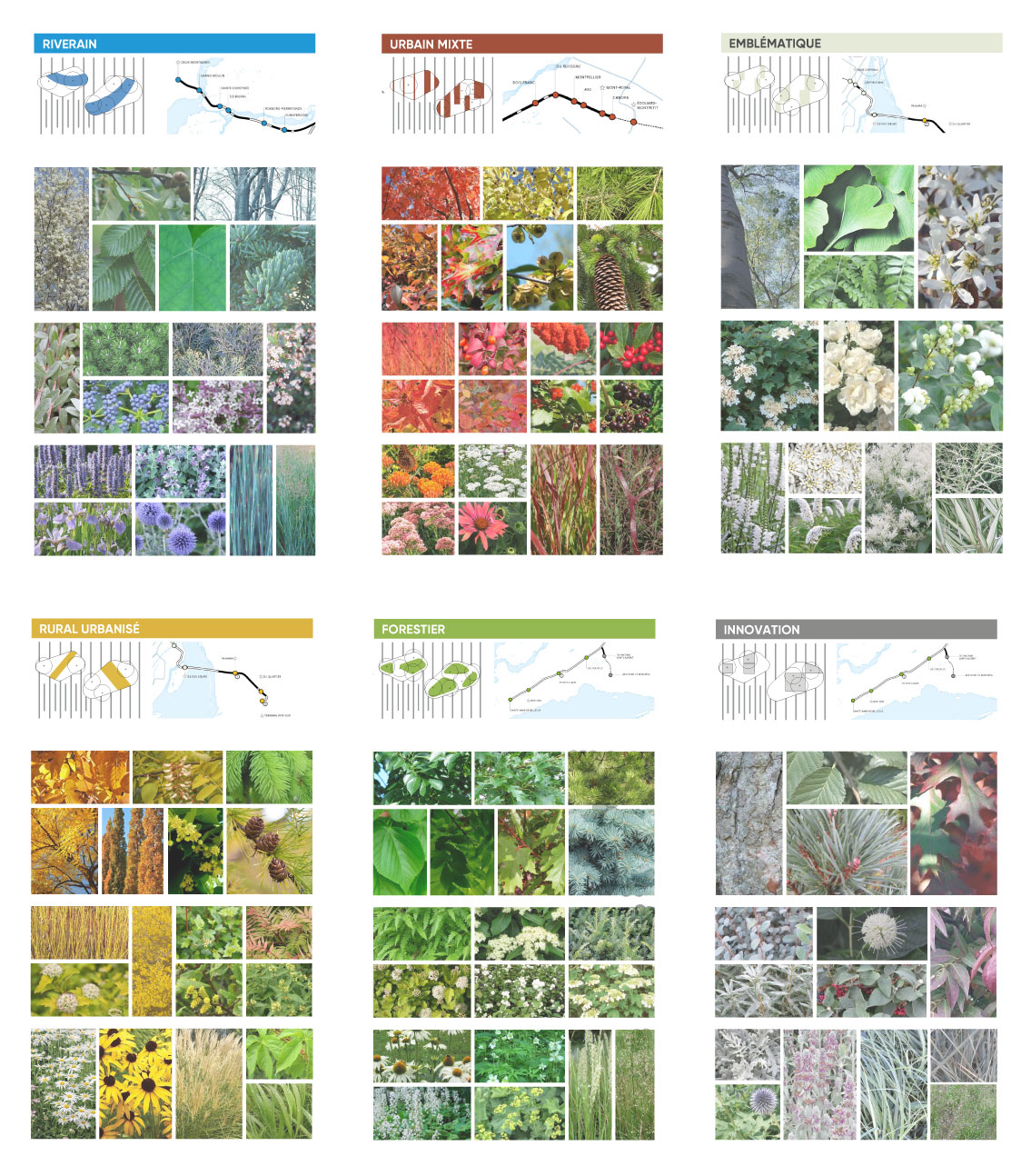 5 things to know about the REM’s architecture

Published on May 23, 2018
Read more 5 things to know about the REM’s architecture