The REM arrives in downtown Montréal and will be connected to the three metro lines (orange, green and blue) in 2022. Here are the information to better understand about work being carried out in your area.

The new station will be located in front of Université de Montréal’s Pavillon Marie-Victorin. The underground station will be 70 metres (20 storeys) below ground, making it the second deepest in North America. 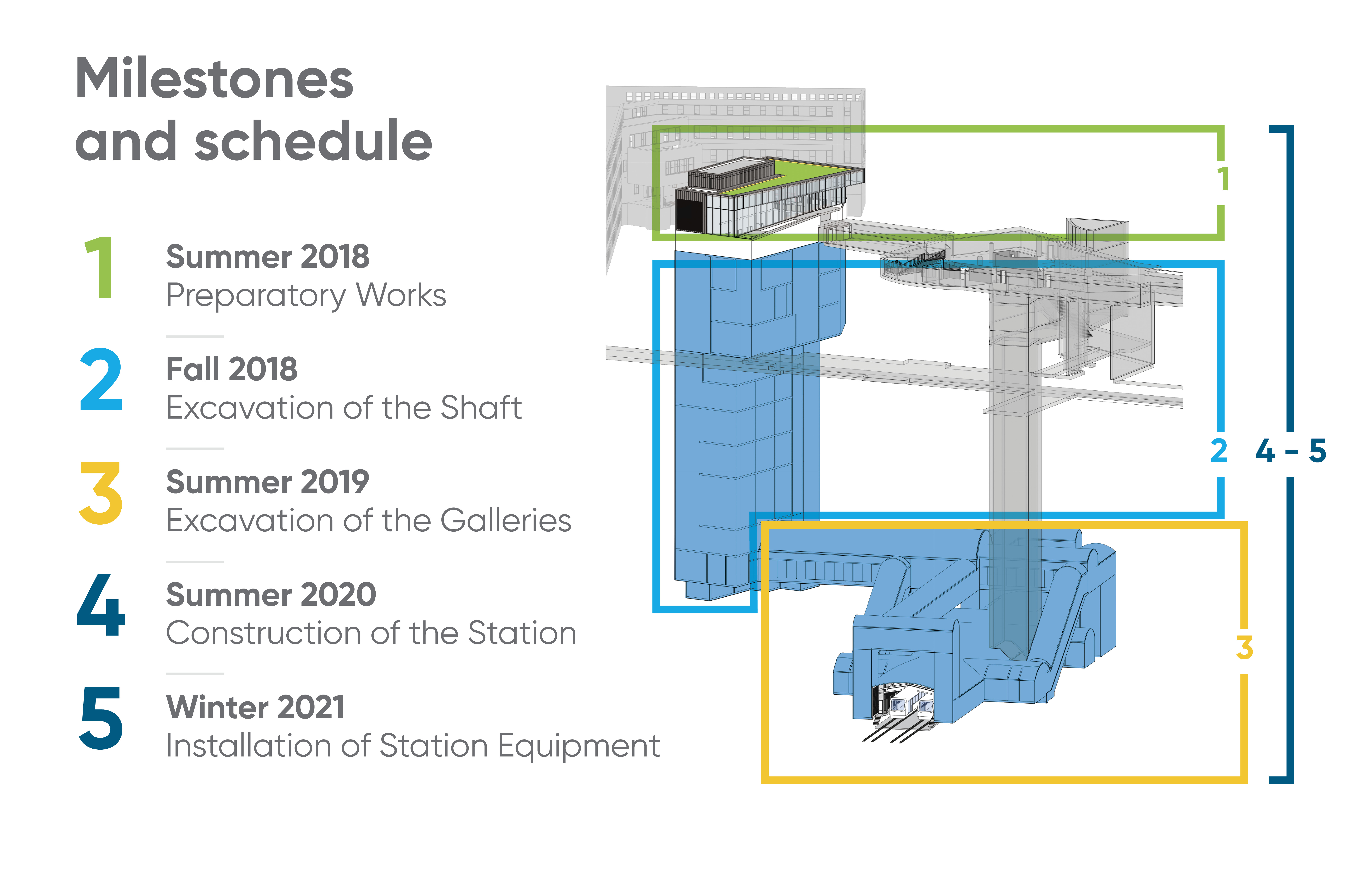 McGill station will be beneath McGill College Avenue in the very heart of downtown, and will offer access to Montréal’s green metro line and its extensive underground shopping and restaurant network (RÉSO). It will also be connected to the Montréal Eaton Centre and Place Montréal Trust.

REM’s Gare Centrale station will be in the same location as the current station, and will offer access to Montréal’s orange line and its extensive underground shopping and restaurant network (RÉSO).

Major work are in progress related to the station’s construction, including the removal of existing railway infrastructure, the installation of equipment (e.g. plumbing, electricity, ventilation, elevators, etc.), the creation of openings between platform level and street level, and the construction of the future central platform for the REM.

Ultimately, the REM will run over the southbound overpass and elevated railway structure leading to Central Station from De la Commune Street. REM will use the tracks on the west side, while the other tracks will still be used by exo, Via Rail and Amtrak.

Work to rehabilitate and repair that structure is in progress.

Works are taking place on the overpass to replace the railway tracks on the west side so as to accommodate the REM. This work involves the removal of ballast and repairs and waterproofing activities. Night work will be required in order to prevent disrupting rail traffic during the day.

Work is taking place in the De la Commune/Peel and Smith sectors to widen the De la Commune bridge and create a dedicated REM track. Development work on the embankment along Smith Street has also begun, with excavation work. Other activities will include pier construction, installation of a drainage system and construction of the embakment retaining wall.

In this sector, the REM will be elevated and run alongside the existing Canadian National railroad tracks. Construction of the elevated structure progressed well in the Marc Cantin sector, and will continue on the rest of the route in Pointe-Saint-Charles in the next months.

The main components of the REM’s elevated structure are presented below: 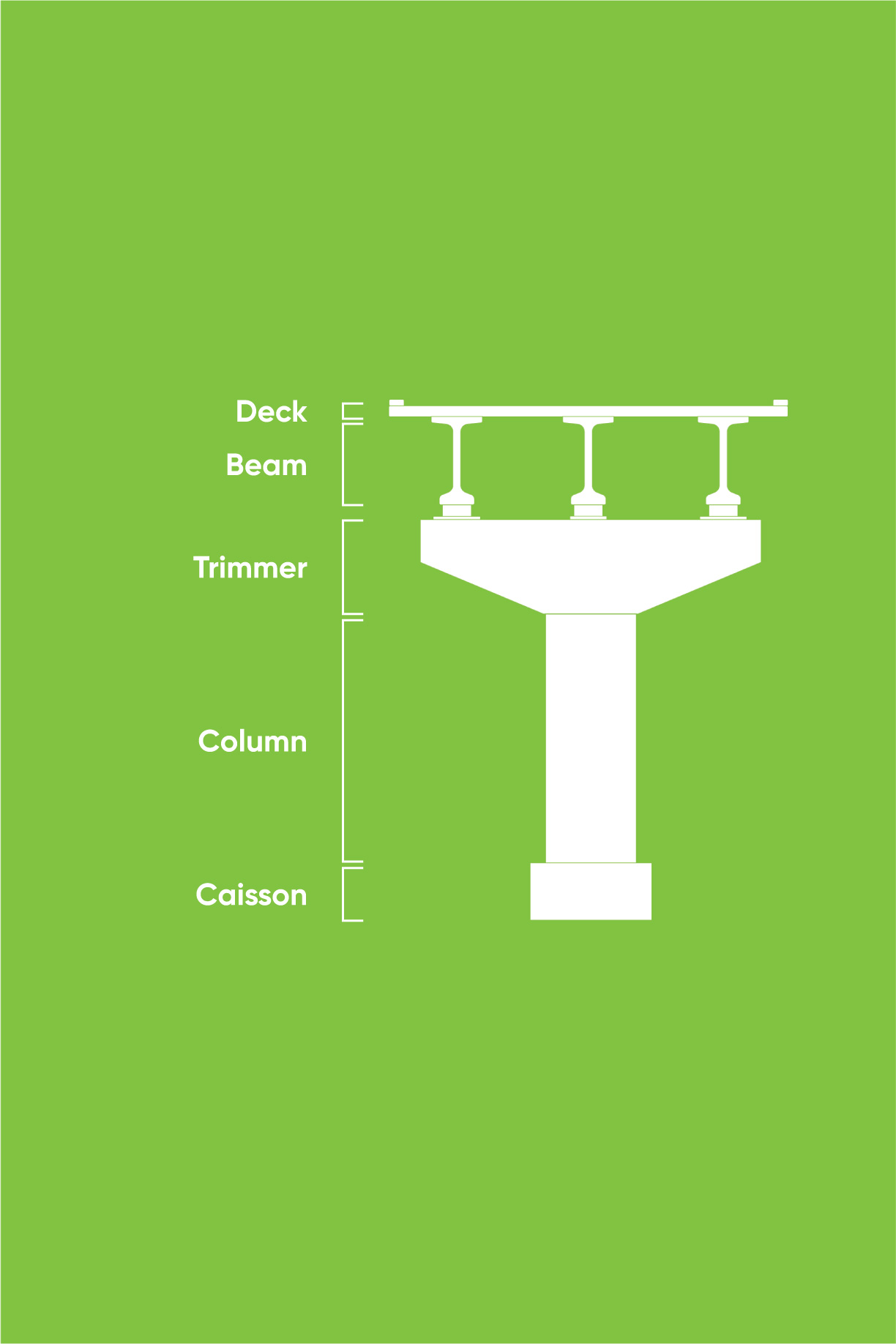 South of the Lachine canal, the frames, beams and deck of the elevated structure are being installed.

Construction of the Île-des-Sœurs channel bridge and the elevated structure is underway.

Work is also continuing on the station’s foundation : 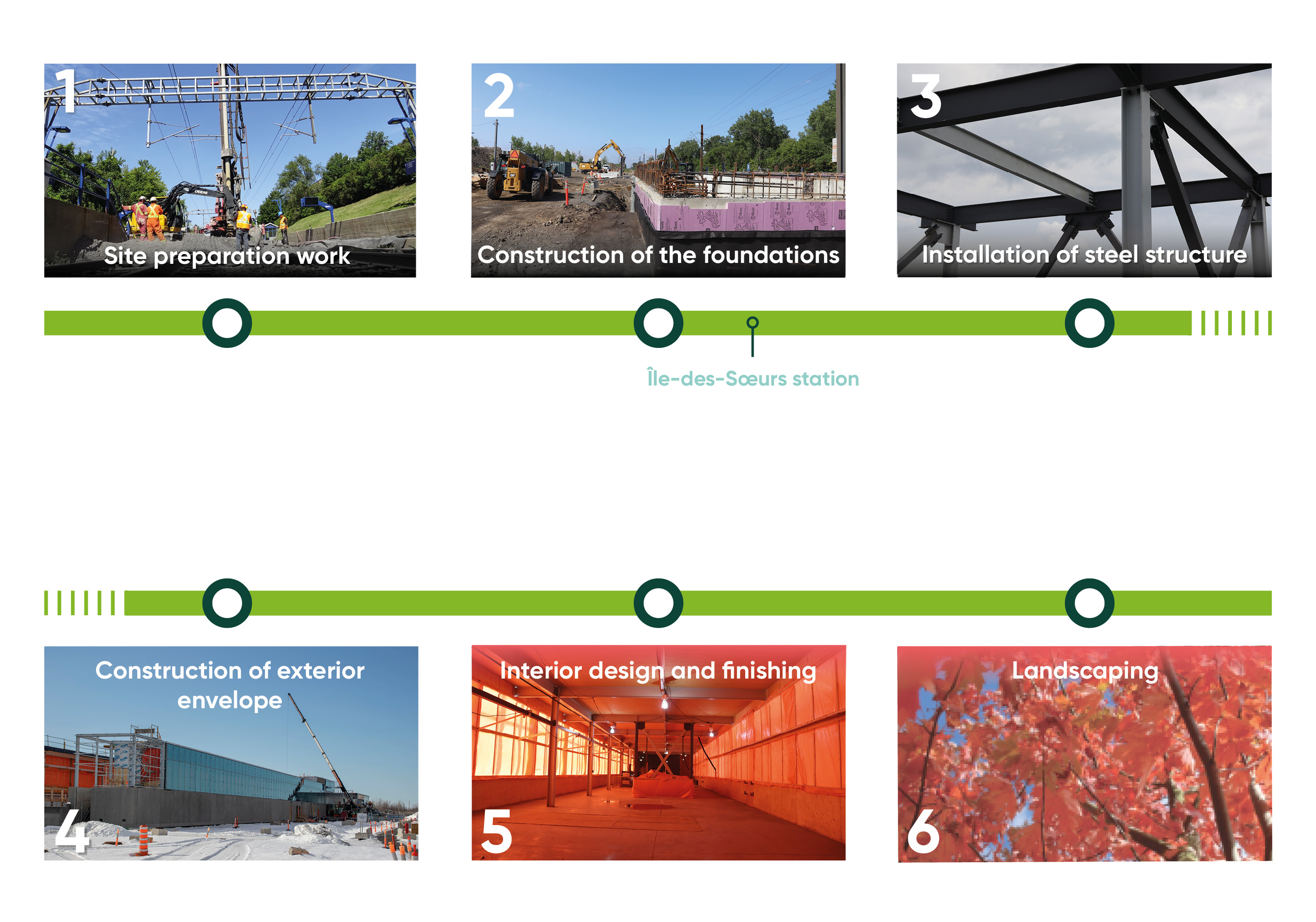 Work is in progress to prepare for the installation of the track base and the catenary posts on the central span of the bridge. 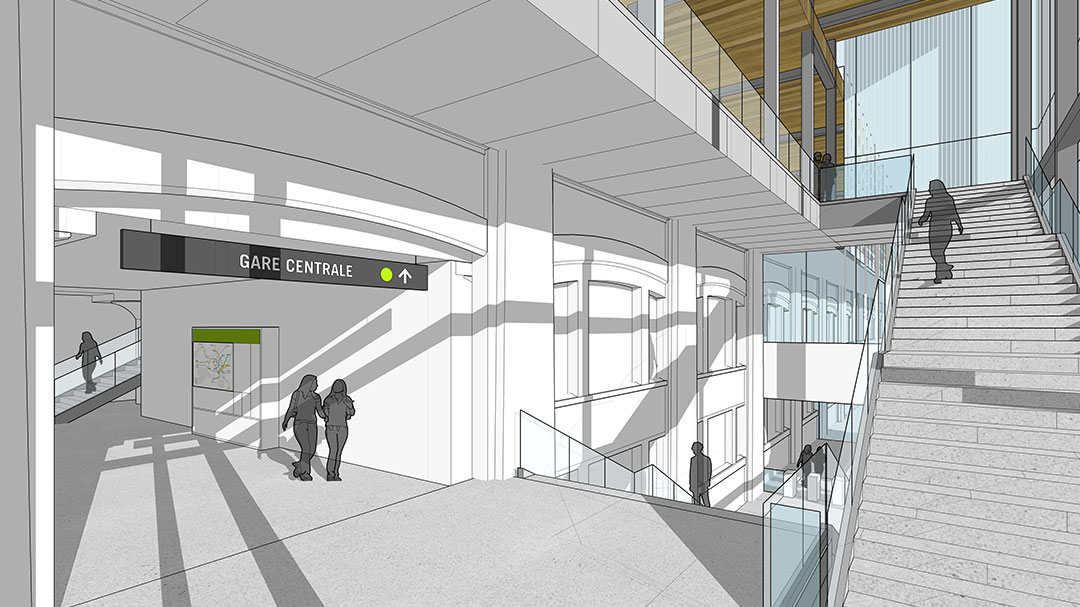 This station, part of the reference project and which has been announced in June 2020, will be integrated into the Viaduc Sud, or “southbound overpass”, between Ottawa and William Streets in Griffintown. Learn more! 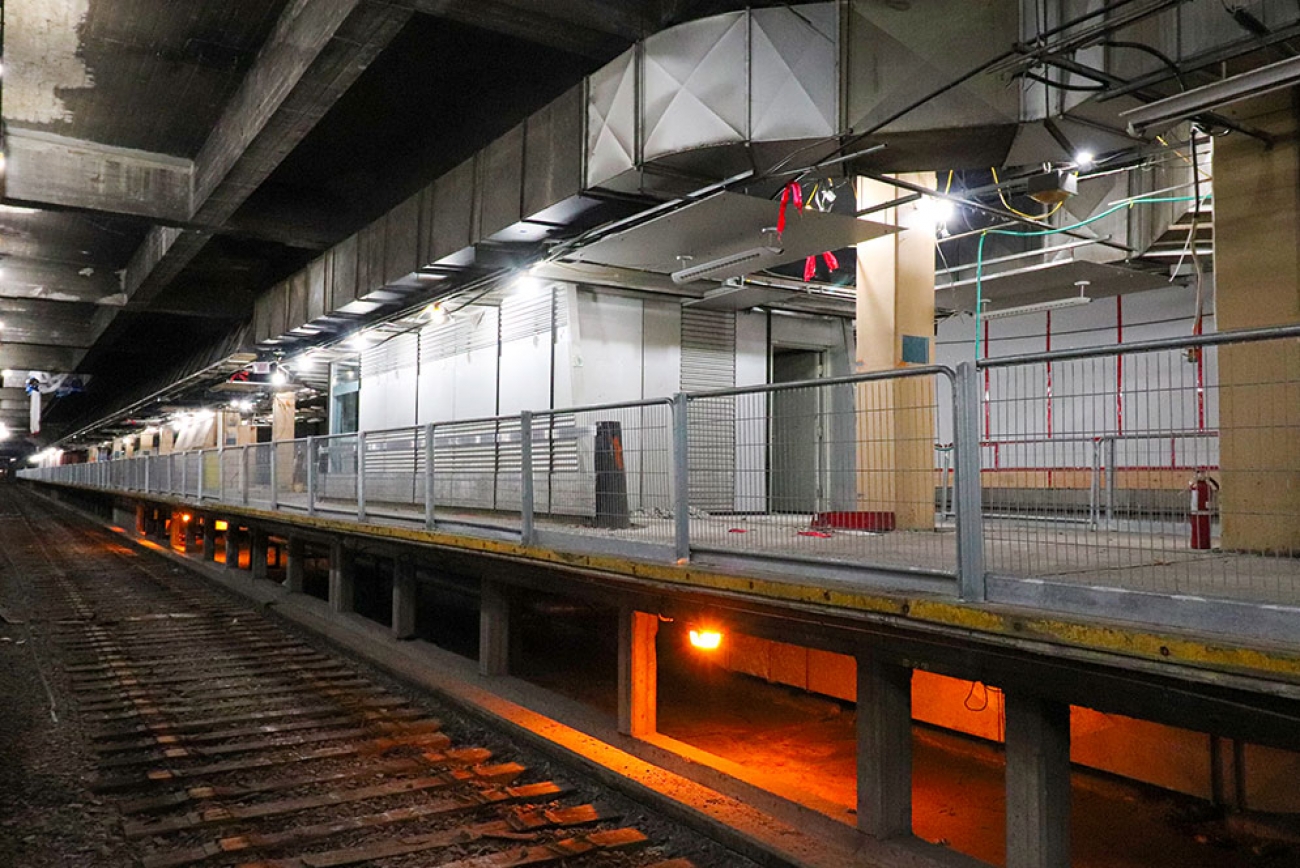 The 3 best ways to explore Greater Montréal with the REM

Published on August 19, 2020
Read The 3 best ways to explore Greater Montréal with the REM
Community

Behind the scenes of Édouard-Montpetit worksite

After excavating the main shaft, the teams are starting a new step: digging the station’s galleries, at a depth of 56 to 70 metres.

In February 2018, the REM route in the Griffintown and Pointe-Saint-Charles sectors was changed. The station will now be aerial (view the interactive map). This is an important station for Montréal’s downtown neighbourhoods and for the development projects that are happening in the area. Located in Griffintown, between Ottawa and William streets, the station will be integrated into the Viaduc Sud, or “southbound overpass,” a structure that functions as a building supporting a rail bridge entering Central Station from the south.

Yes. The arrival of the REM will require the development of new access points for the REM station and a dedicated central platform, as well as modifications to meet the principles of universal access.

The work will generate noise, vibrations and dust. The sidewalk will be closed in front of Pavillon Marie-Victorin, but no road closures are planned.

We are aware of the inconveniences that construction work can generate in a residential zone and near education and infant care institutions. All appropriate measures will be put in place to minimize impact on surrounding residents, including the use of acoustic screens and of a sprayer (fine droplets of water) to keep dust down, and a close monitoring of noise, air quality and vibrations.