Building a 67 km light rail metro involves serious challenges, including that of working quickly, while respecting the environments crossed. The REM route passes through many different environments: waterways, a tunnel in the heart of downtown, protected wetlands, residential neighbourhoods and even below YUL runways!

1. The umbrella technique: repairing from within to avoid a major closure

To cross downtown, the REM will use the Mont-Royal railway tunnel, where a major modernization is now underway.

The work in progress includes rebuilding the vault that supports the southern part of the tunnel, near McGill station. Because of deterioration, it was decided to demolish part of the double arch and replace it. 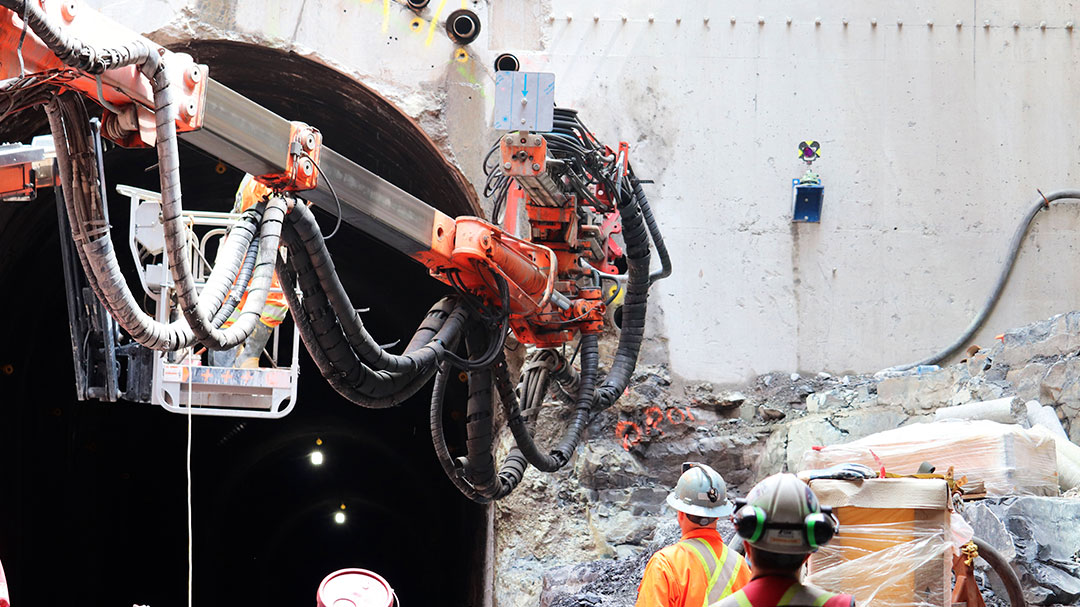 The engineers devised an innovative solution to demolish the old structure and rebuild the arch without causing a major closure – we’re in the very heart of downtown here, and 20-storey skyscrapers tower over the tunnel!

An umbrella method was adopted. These are the steps:

The speed of this solution allowed us to address the deterioration without a major delay in the work schedule. 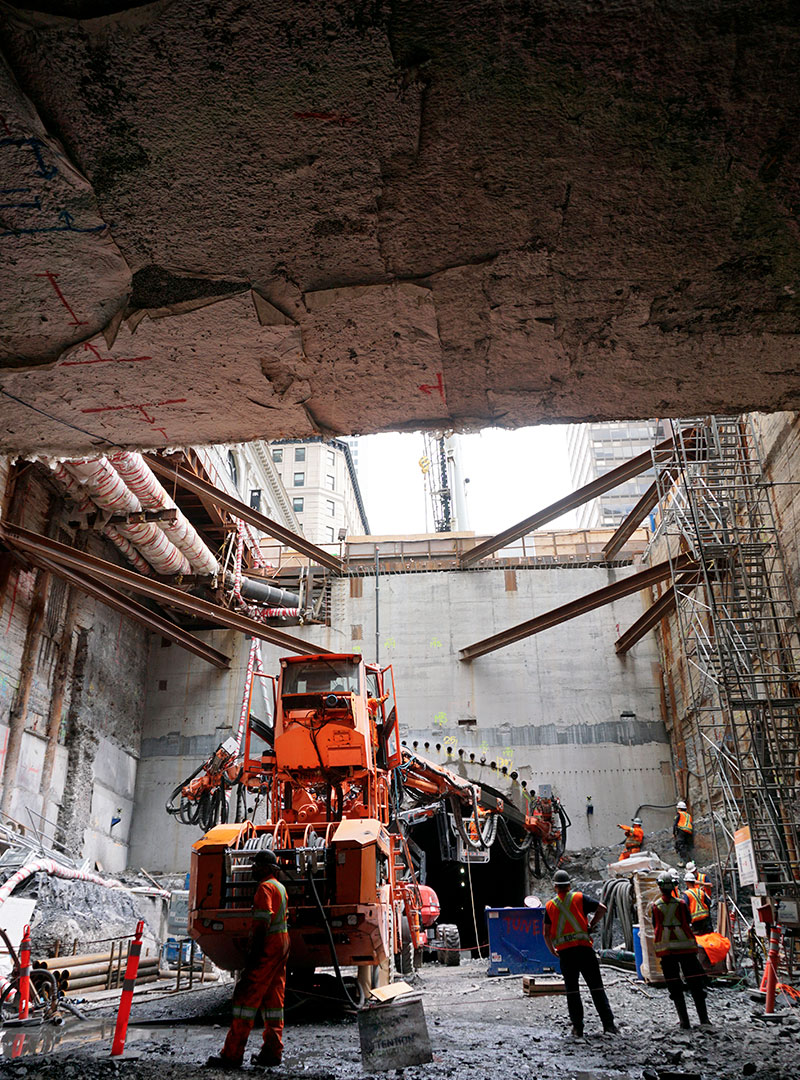 Demolition of the double arch – summer 2021 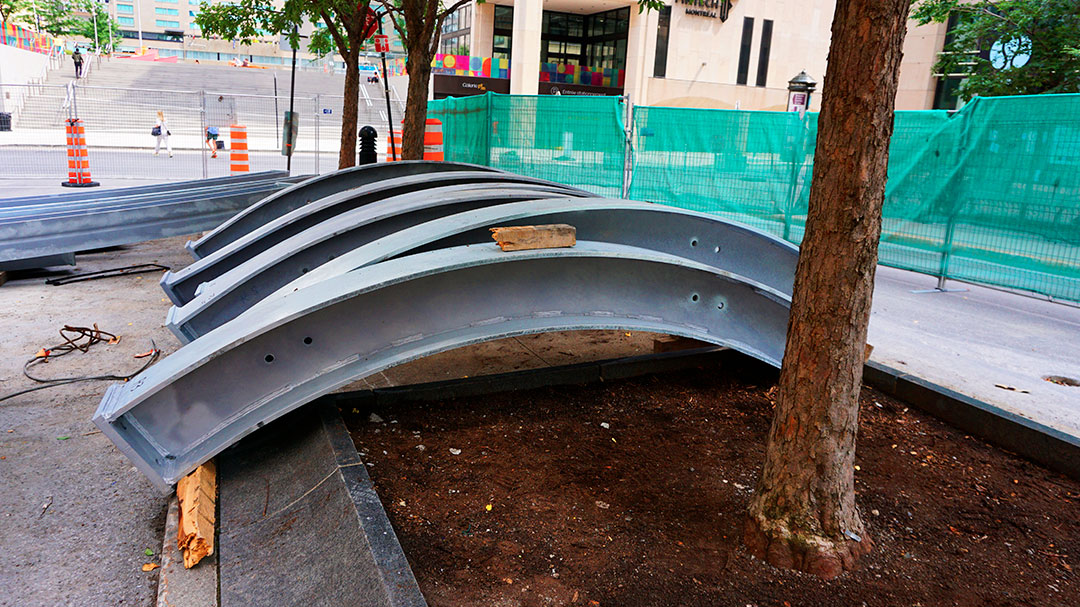 To connect the REM route between Montréal and Îles-Laval, new railway bridges were built using a method rarely seen in Québec until now: an incrementally launched bridge.

Usually, constructing a bridge across a waterway requires jetties (temporary workspaces built on the water to create platforms and docks) on which equipment can be installed. With an incrementally launched bridge, sections are built first on one of the two shores, then pushed out over the water onto the previously installed piers. No jetties are needed in the river. This method helped compensate for the particularly strong current in the construction area, speeding building of the bridge. 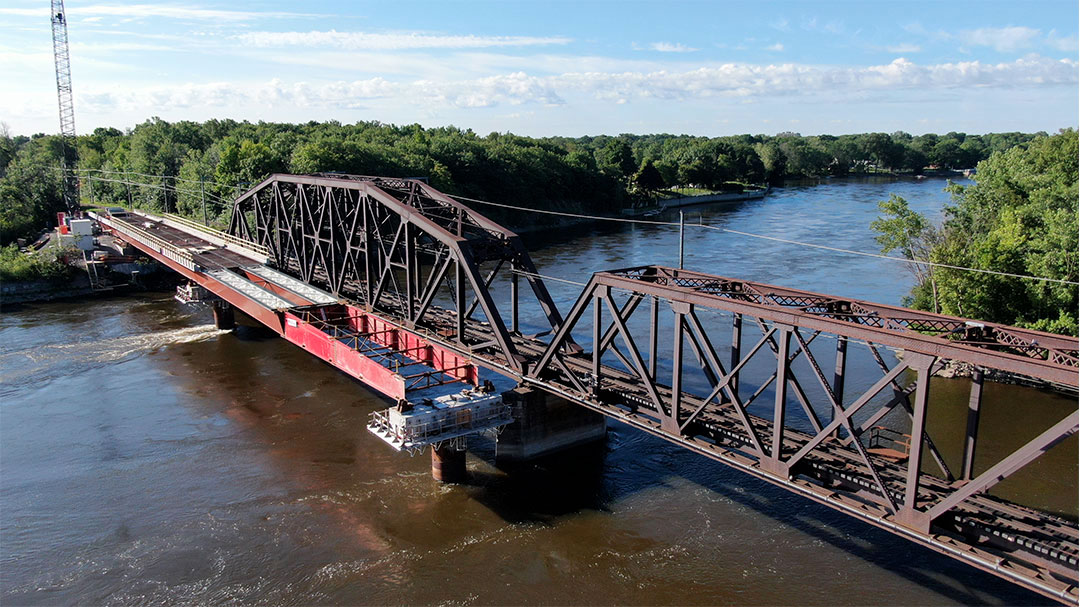 A launching gantry is an impressive 105 metre machine that was used for the first time in Québec to build the REM’s elevated structure. To hasten work, two launching gantries, nicknamed Anne and Marie, were mobilized on the project in different places along the route to allow construction at the same time. 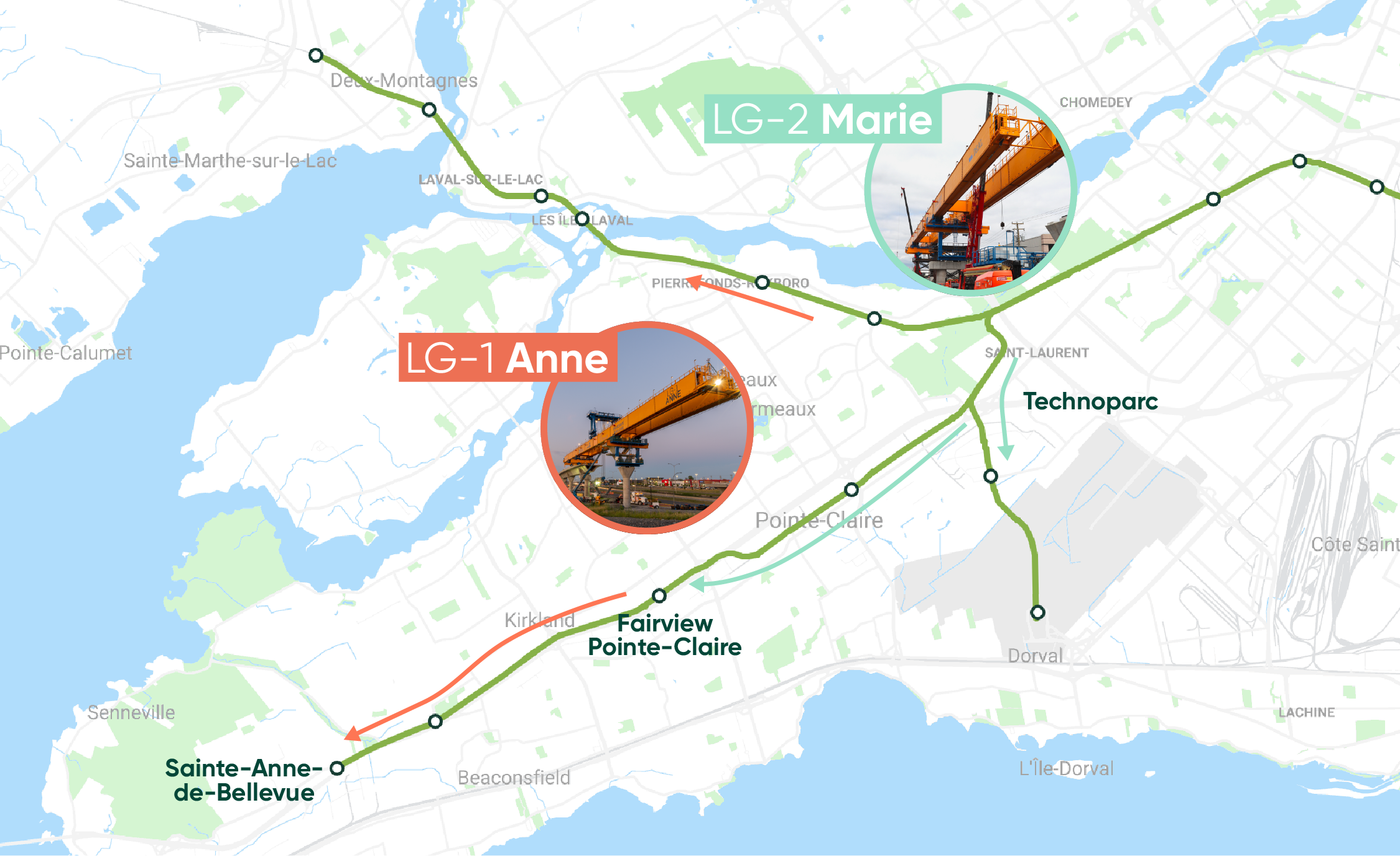 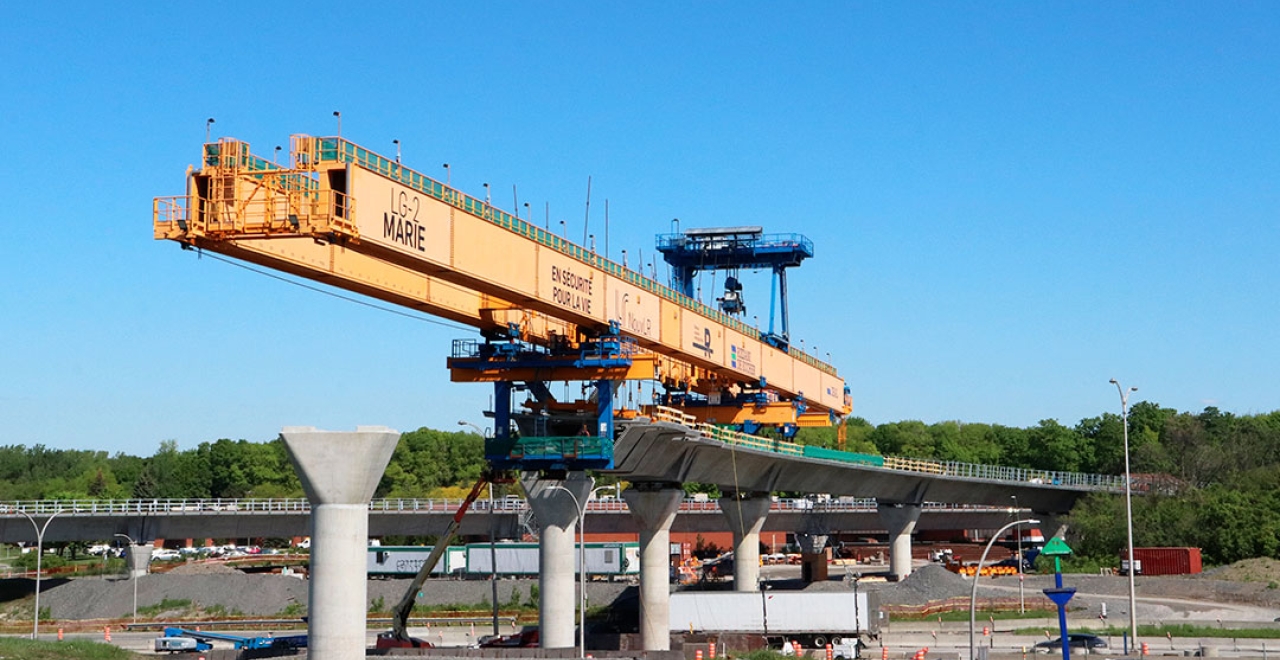 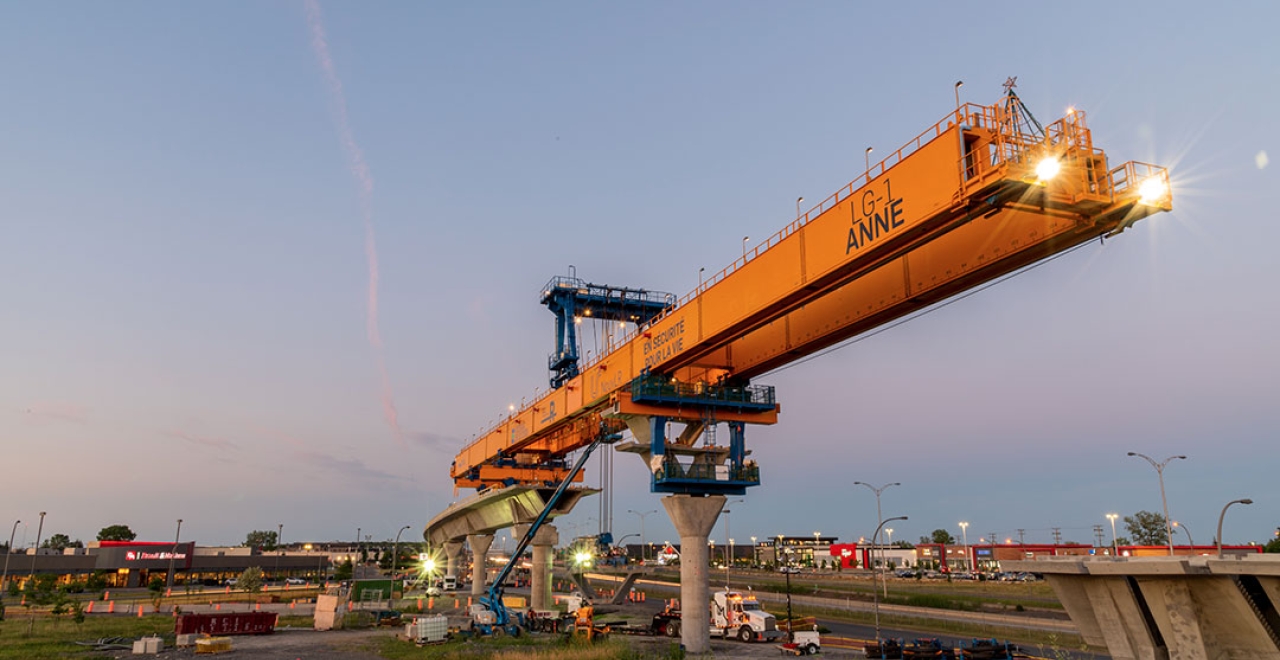 Positioned between two piers, the gantry raises segments (concrete sections weighing 50 tonnes each) one by one to assemble them, ultimately forming what is called a “span”.

Anne and Marie now finished their job building the REM and have just been dismantled. Photos taken in August 2022. 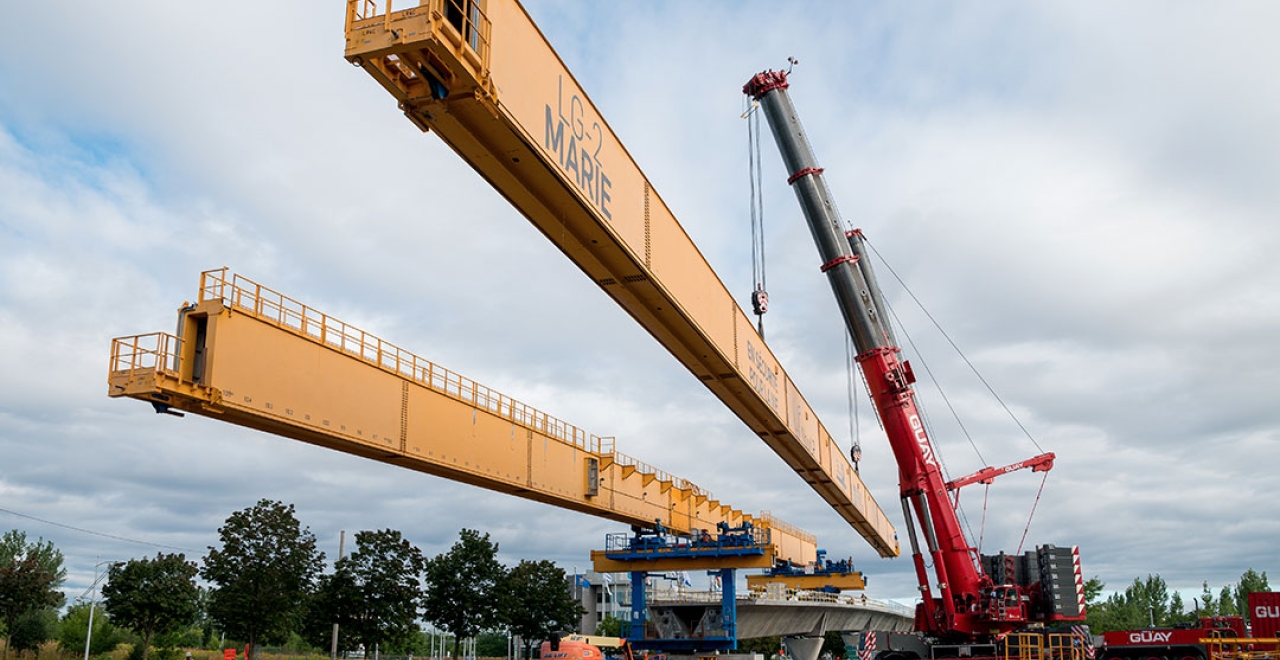 Anne and Marie now finished their job building the REM and have just been dismantled. Photos taken in August 2022. 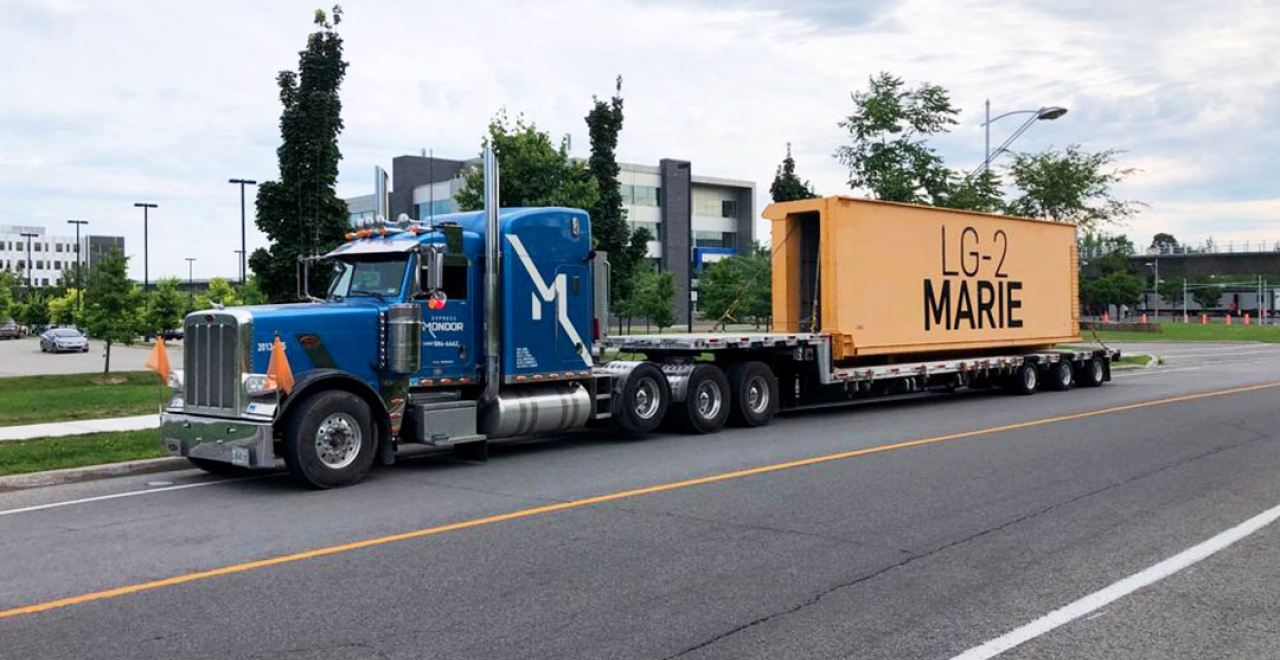 Anne and Marie now finished their job building the REM and have just been dismantled. Photos taken in August 2022.
1 / 3

4. The tunnel boring machine: another first in Québec

The REM will travel between the Technoparc sector and YUL-Aéroport-Montréal-Trudeau station through a 3 km tunnel, 30 metres below ground. Given the very complex soils in this area, and the need to protect the environment and existing infrastructures, only one technology was up to the challenge: a tunnel boring machine. 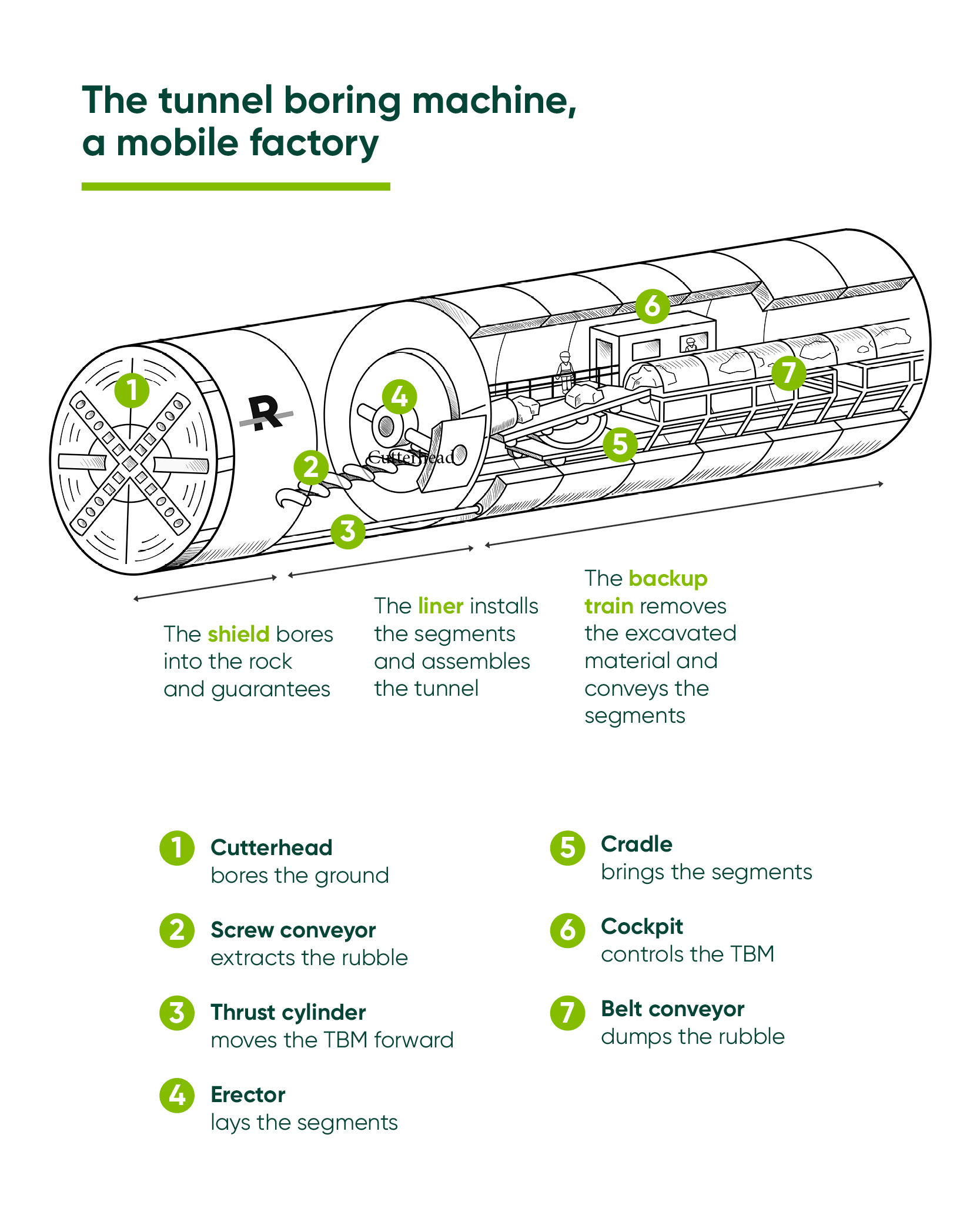 This impressive machine offers the advantage of performing several tasks: it can simultaneously drill rock, assemble tunnel walls and remove the waste and earth generated as it passes. The tunnel boring machine finished its work in the summer of 2022, after drilling and installing a 2.5 km tunnel. 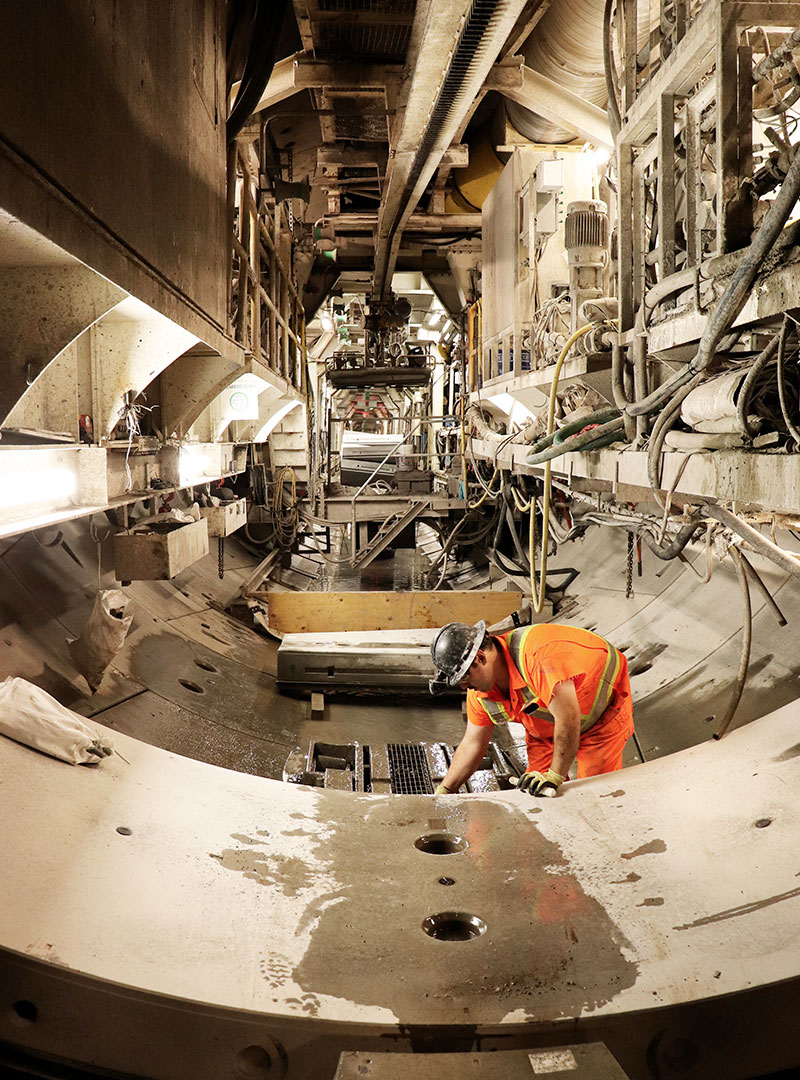 The REM project is fertile ground for innovation! To increase the efficiency of the many shotcrete tasks to be done in the Mont-Royal Tunnel, the SOGUN method was used so teams could determine the exact thickness of concrete applied. 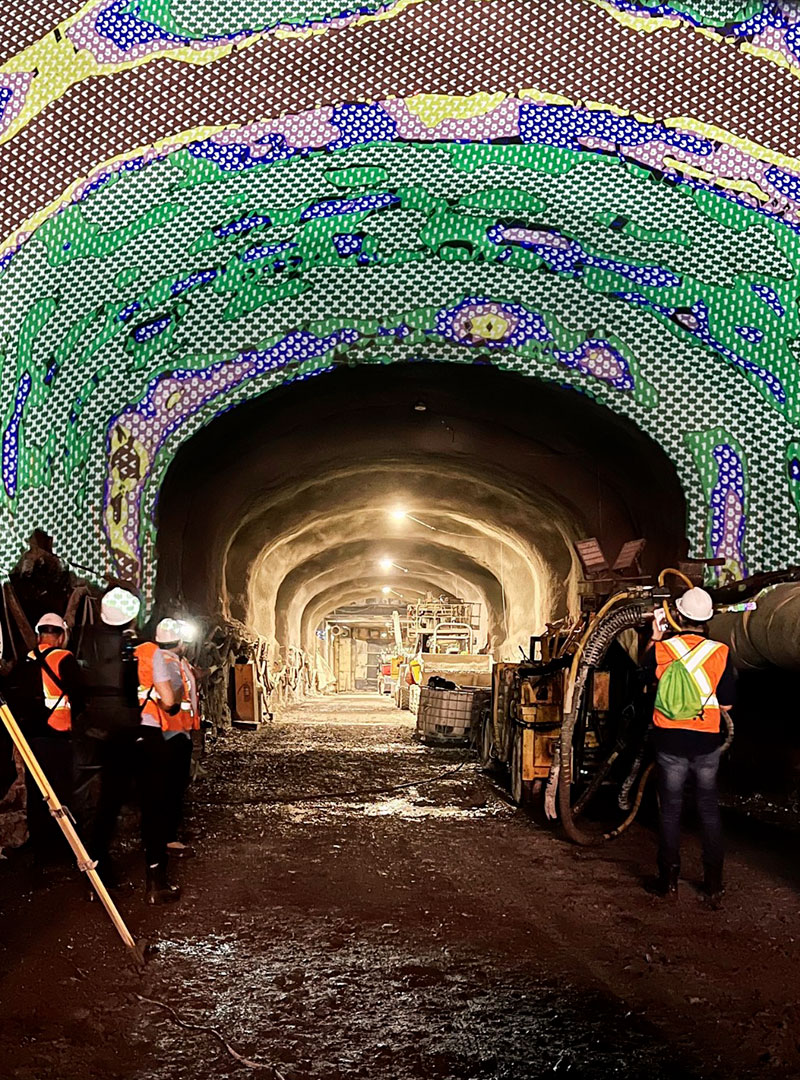 The system uses a Lidar (Light Detection and Ranging) sensor and thousands of laser beams to digitize the tunnel surface. In under a minute, it creates a 3-D scan, processes the data and compares the actual surface with that of the design. Then, the laser light projection system shines different colours onto the tunnel walls to show where work is needed. Along with highlighting small differences on the tunnel walls, numbers indicate how much concrete should be sprayed or removed. This whole system is connected to an on-board computer that can calculate the exact amounts needed by comparing in real time how the tunnel is progressing against the design file, which is the final result desired. 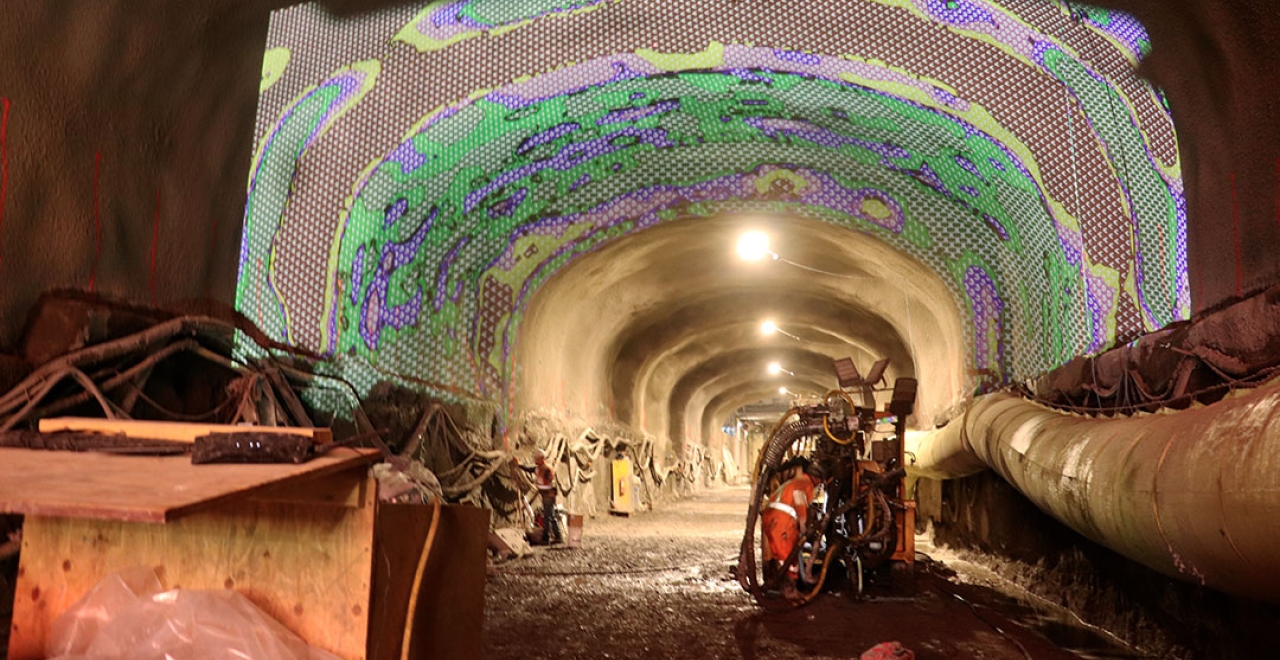 The laser lamp projection system projects various colors on the walls of the Mont-Royal tunnel. 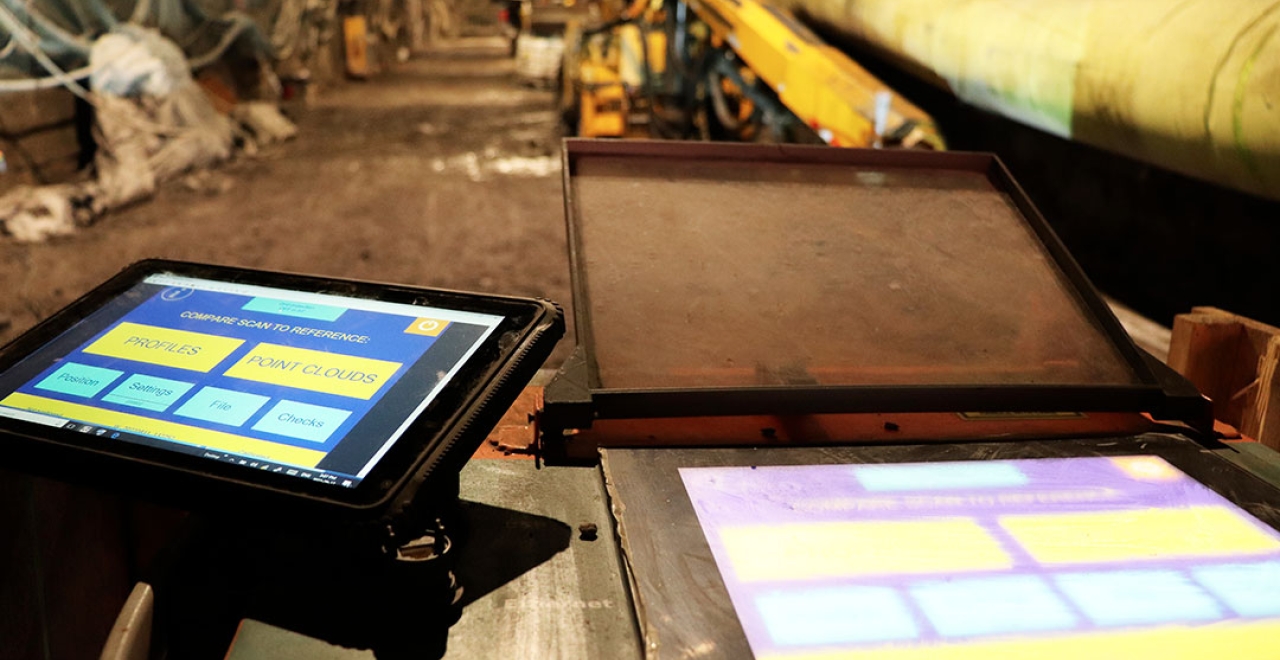 This system is based on an on-board computer that is able to calculate the exact quantities of concrete required on the walls. 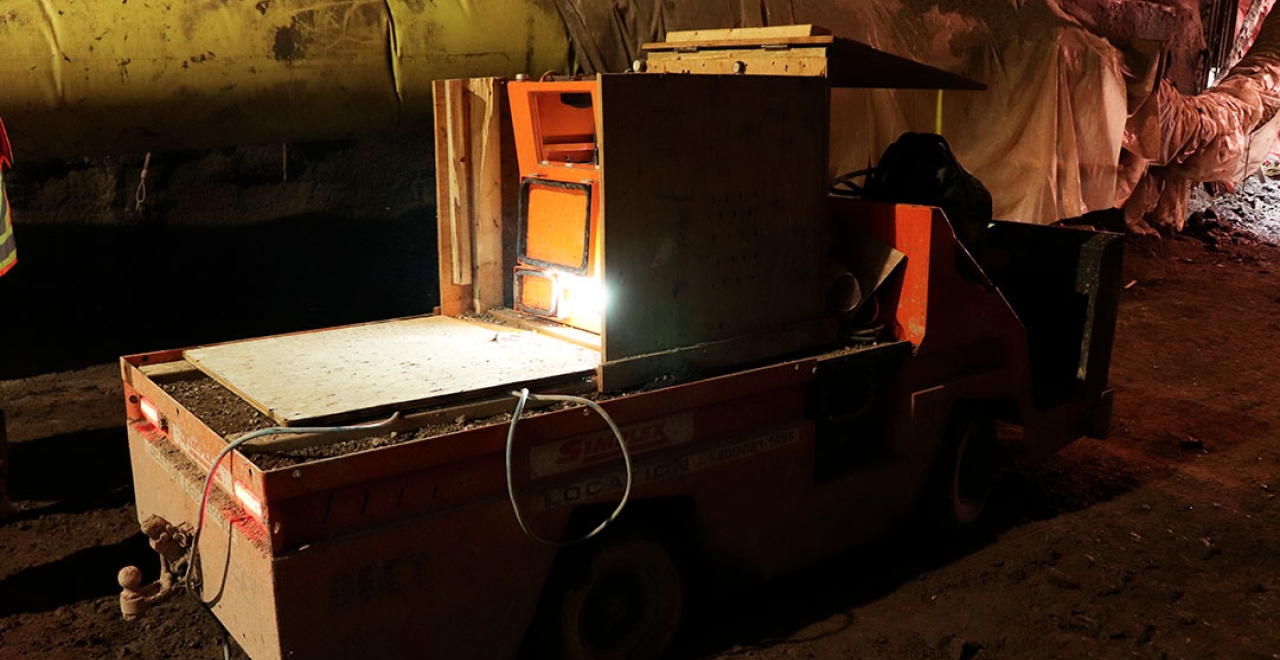 The SOGUN technique used in the Mont-Royal Tunnel.
1 / 3
Network map

Alice, the tunnel boring machine, has completed its run to the airport