Confirmation of the Réseau express métropolitain project on February 8 also meant that the REM would become a new transport operator in the greater Montréal area, in the same way as STM, RTM, STL and RTL.

To better accommodate their future users, the REM needs to integrate seamlessly with the existing public transportation network, which is why the integration agreement with ARTM was needed.  ARTM consulted with all of the municipalities and transportation companies to ensure that the REM’s integration would be harmonious and concerted.

The REM’s integration is intended to optimize all networks, in addition to offering more services for more users. It is consistent with the ARTM’s global vision for transportation planning.

Principles of the agreement

The principles behind ARTM’s agreement with the REM are summarized as follows:

The REM route will replace the existing transportation services, which are saturated and require transition to a high-performance method to increase the capacity.

The purpose of developing a public transportation system such as the REM, metro or commuter train is to offer users reliable, high-performance and high-capacity transportation services.

The bus services that feed the train, metro or REM will:

In several cases, such as in Laval, the savings generated by reducing the length of bus routes were reinvested to improve other local bus services.

Of course, buses continue to run and serve the local populations. Nonetheless, the intent is to ensure that for metropolitan-type travel, buses all run to the metro, commuter train and REM lines. These three transportation methods act as a sort of backbone: bus networks all lead to them, running the shortest possible distances.

There is no intent to hinder public transportation project development. For example, if a connection between the Bois-Franc (REM) and Côte-Vertu (orange line) is expected, it would not be hindered by the agreement.

Lastly, it is important to explain the non-compete basins - see map below.

The purpose of defining these basins is not to prevent development of existing lines, such as the Vaudreuil or Saint-Hilaire commuter trains. The objective, rather is to provide services that complement the metro, train and REM services. It is not public transportation development within a basin that is limited, it is the connection between the basin and downtown, which ultimately is the service that REM offers. 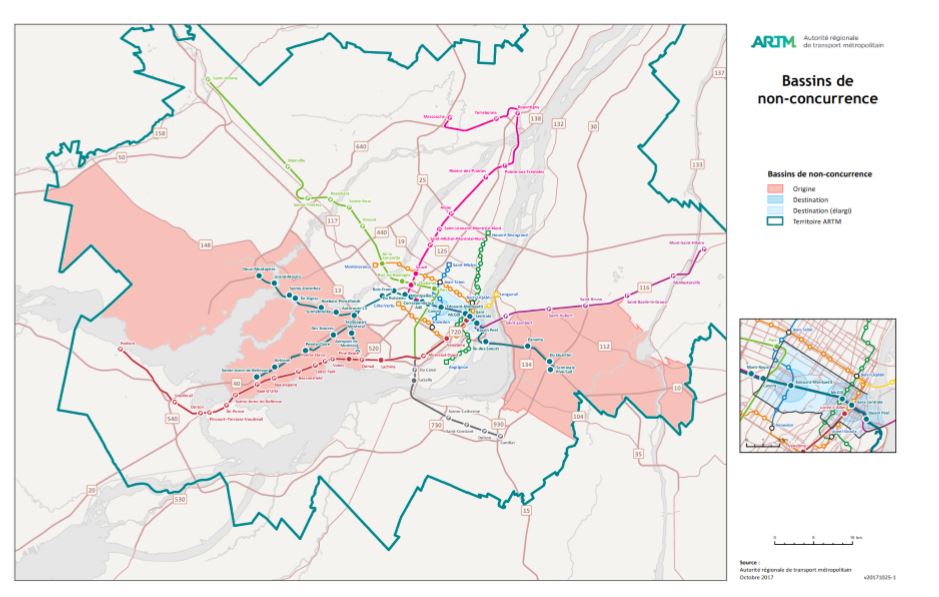 For example: a bus that connects the Fairview Pointe-Claire hub with downtown will no longer be possible. This same bus that can no longer run downtown could continue providing local service and even enhance its offering. Rather than using this bus, commuters will be able to use the REM and enjoy fast, frequent and reliable service.

Creation of these basins, however, does not limit the possibility of:

The REM and winter

Start of tests on the REM, a driverless light rail system