100 Years of History: Secrets of the Mount Royal Tunnel

The REM will link McGill and Édouard-Montpetit stations via a tunnel through Mount Royal. However, this tunnel is hardly new: it will celebrate its 100th anniversary on October 21, 2018. To mark the occasion, we will be holding a tour of the tunnel for the public (see the box at the bottom of the page) and sharing a few of its secrets!

It all began in 1910. At a time when cars were reserved for the wealthy and flying was still in its infancy, trains were how most people travelled and how most goods were shipped. As a major urban centre, Montréal was a key destination and one of the country’s main railway hubs.

There were three railway companies in Montréal. The Grand Trunk Railway and the Canadian Pacific Railway (CPR) were already well established, and each had a station downtown. That wasn't the case for the third company, the Canadian Northern Railway, whose station was located in the east end of Montréal. To serve the port and downtown, Canadian Northern was not able to get around via the west (an area dominated by its competitors) or the east (which was too expensive because of expropriations.) Engineer Henry Wicksteed therefore proposed digging a tunnel through the mountain and building a new terminal downtown. The terminal would be the predecessor of the current Gare Centrale, which was entirely rebuilt in 1943. 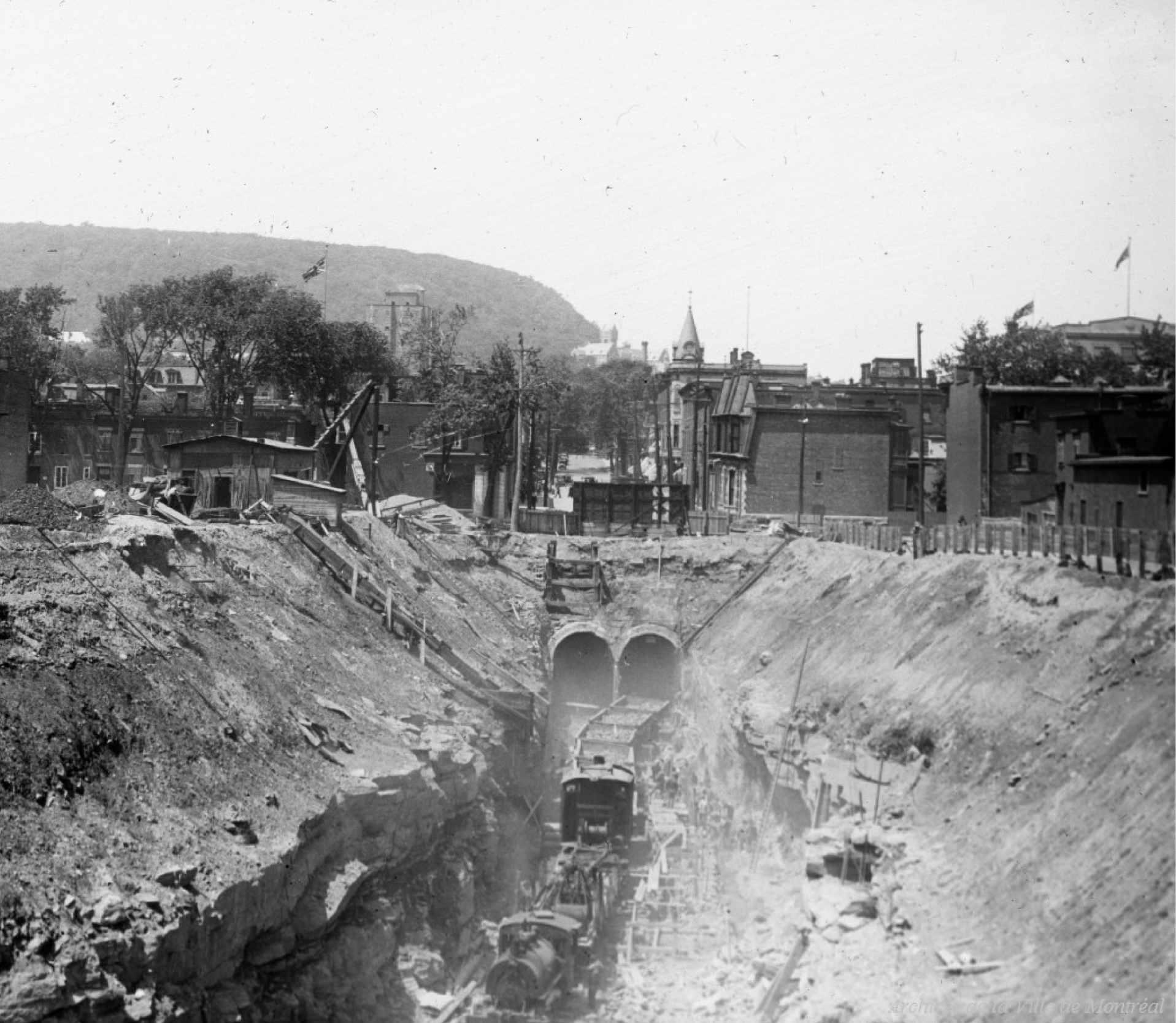 Work on the Mount Royal Tunnel began in July 1912. It was a technical challenge for its time: the tunnel was 5.3 km long and up to 188 m deep. Two crews dug from each side of the tunnel, meeting in the middle in December 1913. However, although the tunnel was ready, development of the railway was delayed due to World War I and a labour shortage.

Some five years later, the railway tunnel was finally completed. The first train chugged through on October 21, 1918, linking Montréal to Toronto. (A ticket cost 25 cents!) Rather than a steam locomotive, it boasted an electric locomotive, which was rare at the turn of the 20th century.

Meanwhile, Canadian Northern had no shortage of ideas for financing the massive project associated with the tunnel’s construction. The company decided to build a model city on the other side of the mountain. This would become the Town of Mount Royal, whose original plans (from 1912) are still adhered to today. The property income would enable Canadian Northern to partially finance the tunnel’s construction, and the city would be accessible by train, the station being located just minutes from downtown.

A few years later, Canadian Northern merged with a number of other railway companies to form Canadian National (CN). The work of the Canadian Northern had a lasting impact on the history of public transit in Montréal, as the project lay the groundwork for Gare Centrale and the Deux-Montagnes rail line.

In 1995, the Portal Heights station (Deux-Montagnes line) was renamed Canora station as a nod to Canadian Northern, the syllables being taken from CAnadian NOrthern RAilways. 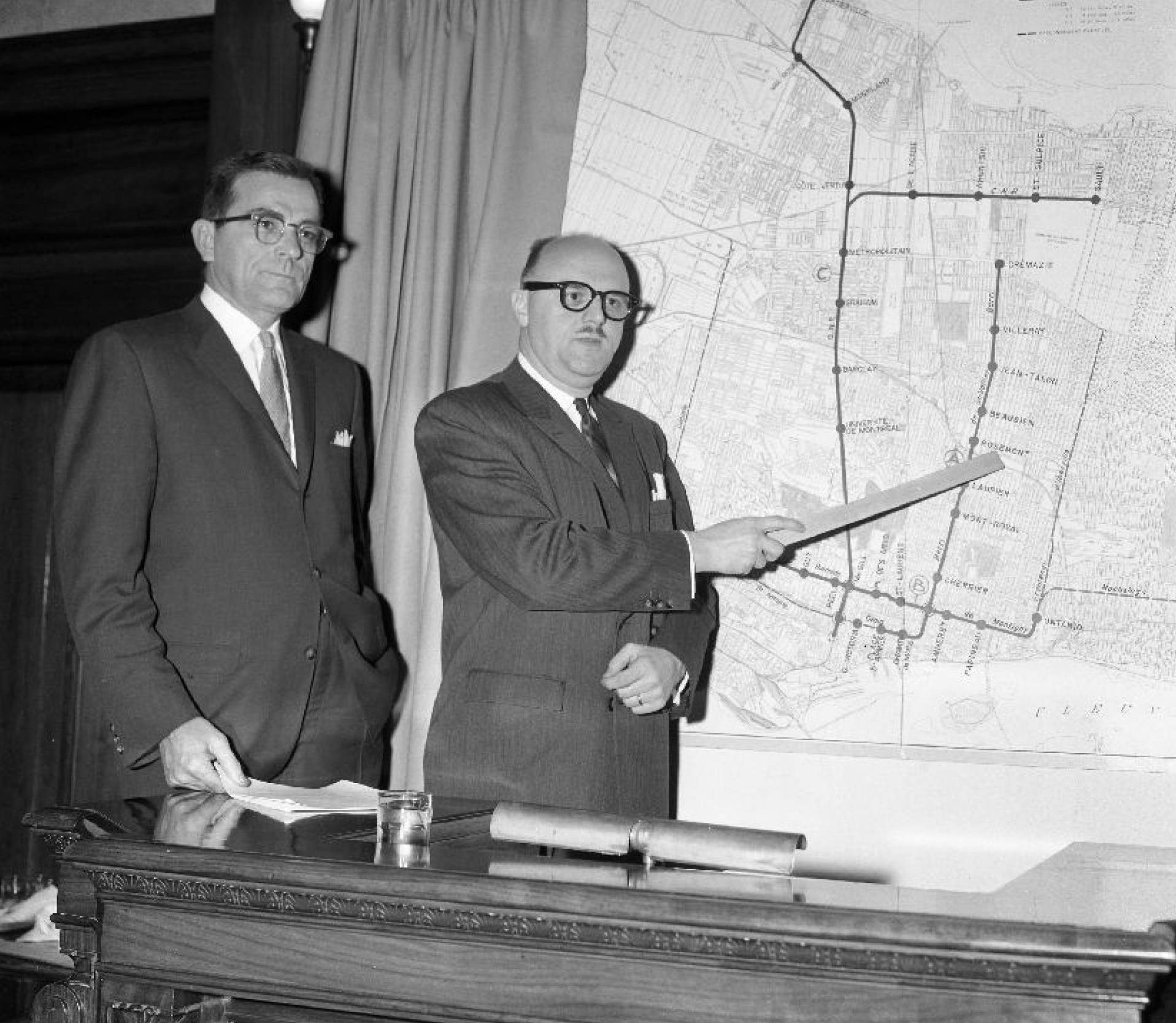 You’re likely familiar with the Green and Orange lines, but the Red line may not ring a bell! In the initial project, the third line was meant to run north/south through Montréal via the Mount Royal Tunnel. This would enable the metro to connect Outremont, the Town of Mount Royal, Saint-Laurent, Cartierville and even Ahuntsic.

However, discussions dragged on with the municipalities that the line would go through, and a year after Jean Drapeau's announcement, Montréal was chosen to host Expo 67. The Red line was no longer a priority, and the city focused instead on building the Yellow line. In the 1970s, the construction of the Blue line (commissioned in 1986) was the final nail in the project's coffin.

However, even without the Red line, the plan to have the metro travel through the Mount Royal Tunnel was still in the works. In 1983, during the construction of Édouard-Montpetit station, the architects planned for a connection with the tunnel. They drew plans of the station as we know it today while considering how it could be connected in the distant future. Given the depth of the tunnel at this location (70 m), they envisioned a connection involving high-speed elevators. That was the solution chosen by REM engineers. 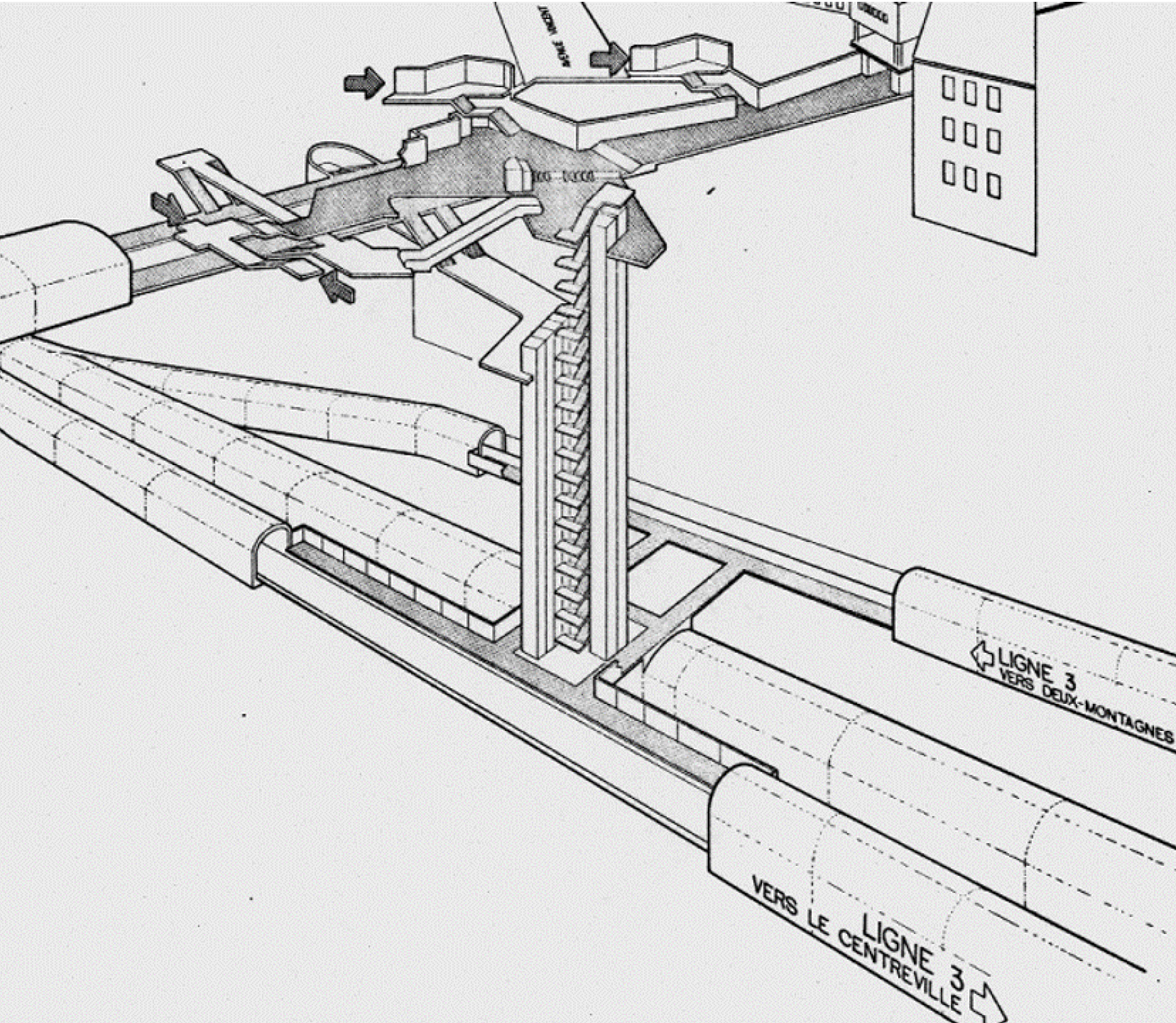 Some 100 years after the tunnel's construction, and 60 years after being unveiled by Jean Drapeau, the plan to have a metro travel through the Mount Royal Tunnel is finally being realized. Presented for the first time in 2016, the main segment of the REM largely reflects the 1961 plan. Station Édouard-Montpetit (added to the REM in November 2016) is based on the work completed by architects in 1983. And the Red line has become the R line. 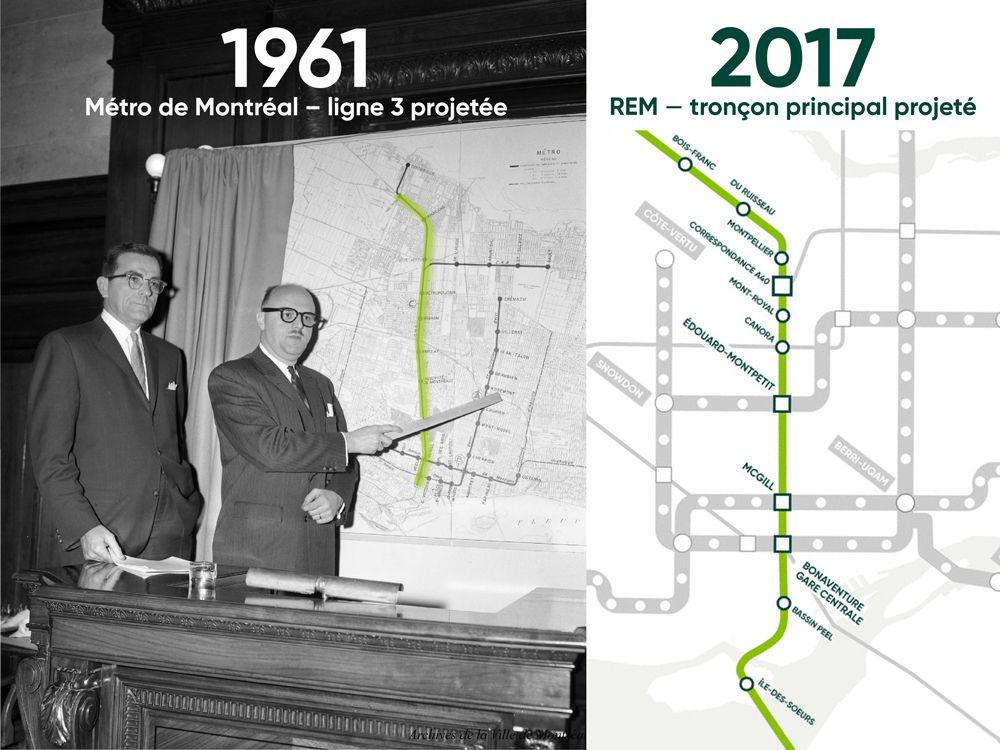 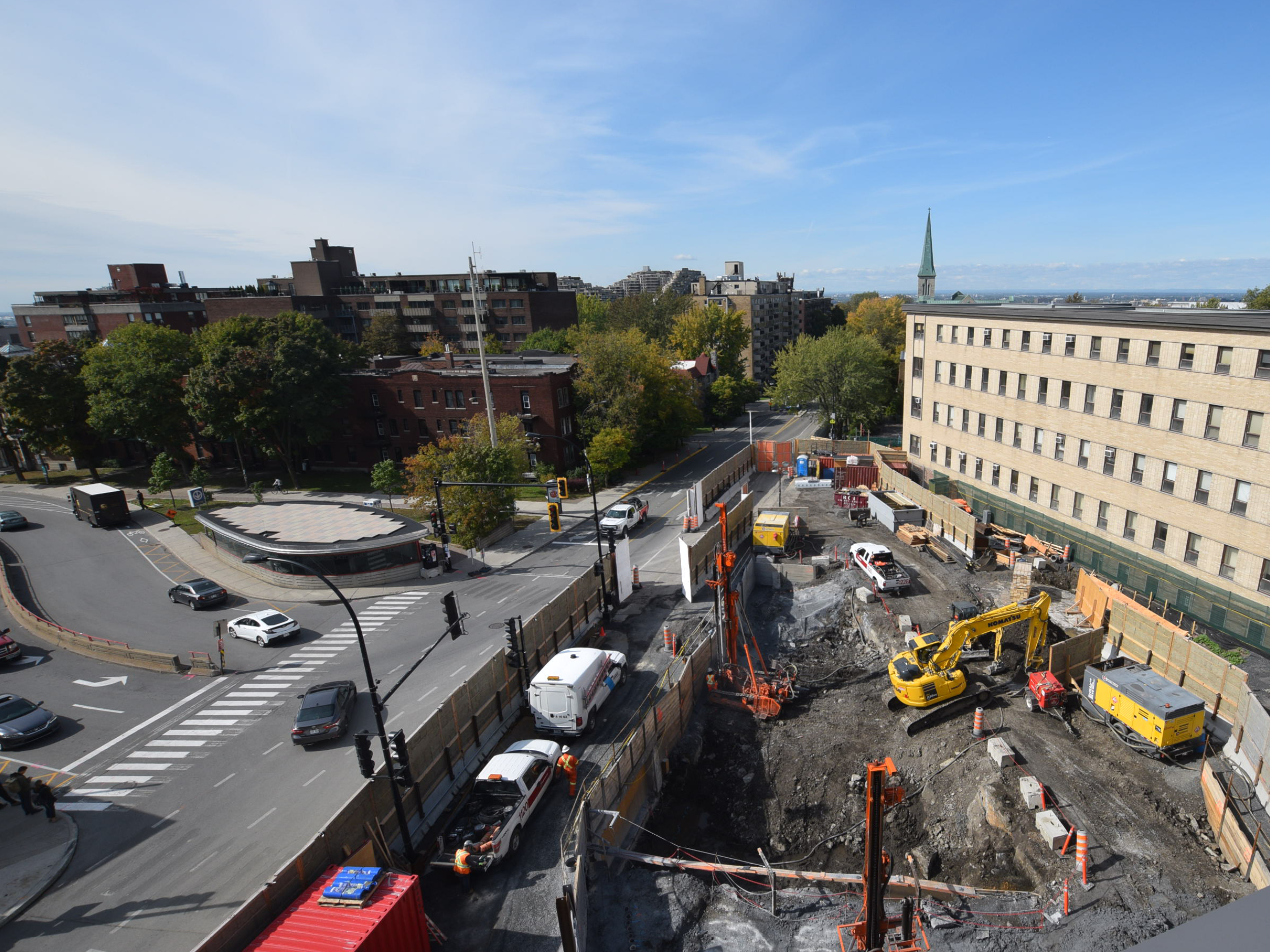 The excavation work at station Édouard-Montpetit started in September 2018. The REM station will be commissioned in 2022.

Intrigued by this story? Enter for a chance to win tickets for a tour of the Mount Royal Tunnel

To mark the tunnel’s 100th anniversary, we will be hosting a tour of the tunnel on Sunday, October 20, 2018 (at 12:30 p.m., the exact schedule is to be confirmed) and we are giving away three tickets to the public. This is a unique opportunity to learn about this 100-year-old infrastructure. You will also have a chance to speak with our team engineers about the REM project.

Video: Tour of the Mount-Royal with the contest winners